Become the next Gorma Emperor.

Exile Akomaru from the Gorma Tribe (both succeeded).
Defeat the Dairangers.
Gain absolute power (both failed).

Lieutenant Colonel Shadam is the leader of the Gorma Triumvirate and the main antagonist of Gosei Sentai Dairanger. He is the one in charge of the Gorma Tribe invasion in modern times and is later revealed to be the one who restarted the conflict between the Dai and the Gorma, having recreated the Gorma out of clay, as part of a scheme to become the next Gorma Emperor, Gorma Emperor XVI. He is also the father of Akomaru and Kou of the Howling Star.

When the Gorma Tribe declared war on the other two tribes of the Daos Empire, Shadam was the one who spearheaded their military campaign. After the conflict resulted in both sides being devastated and the Gorma almost completely wiped out, Shadam, left as one of the few survivors, created clay doppelgangers of all the upper Gorma leadership, giving them fake memories to make them believe they were real. However, Shadam also created a clay copy of himself and imbued within it his own ambitions to become the next Gorma Emperor, as well as the knowledge of the truth about the Gorma Tribe.

At the end of the 20th Century, the clay copies the original Shadam created reemerged to begin their conquest once more, with Shadam and the Gorma Triumvirate serving as the commanders of their invasion. However, they faced resistance from the descendants of the Dai warriors who had fought against the Gorma in the past, the Dairangers.

Eventually, Shadam was able to usurp Gorma Emperor XV as ruler of the Gorma Tribe after revealing the Emperor to be a clay copy and taking the Earth Shaking Jewel from him. Becoming Gorma Emperor XVI, Shadam sought to use the Earth Shaking Jewel to dominate the entire world, though also became cursed by the same madness it had afflicted its previous wielders. However, after Daijinryuu appeared, the Earth Shaking Jewel abandoned Shadam to appease the mighty god's wrath. Shadam attempted to flee the Gorma Palace, but was confronted by Ryo and fought him in a knife duel. After being beaten by Ryo, Shadam was revealed as nothing more than a clay copy of the original Shadam, much to his own shock. Shadam then began to crumble, pleading with Ryo to save him until he was no more than a pile of dust, with only his eyeball left intact. 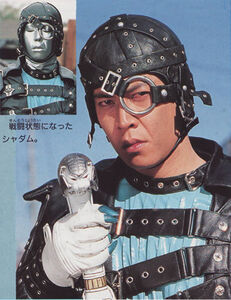