Cover all of planet Earth and reproduce.

The Life Fibers (in Japanese: 生命戦維, Seimei Sen'i) are a race of extraterrestrial parasites that are responsible for the advancement of humankind, and they also contributed to the use of clothes and the need to cover oneself. The Life Fibers are a major plot point in the 2013 anime Kill La Kill, and are used by the antagonist of the series Ragyō Kiryūin as a means of dominating the world.

Originating from deep space outside of Solar Systems (and possibly outside of the galaxy), Life Fibers are extraterrestrial organism which evolutionary history left unknown. They are multi-cellular microorganisms whose bodies grow in long, resilient strands that radiate bright red energy. Despite can be damaged by materials which made by their own very being such as Rending Scissors, injuries that they sustain will heal/reform into a whole in a matter of seconds at a very least unless if being cut in sides simultaneously in a scissoring motion.

Life fibers are parasitic lifeforms living off bio energy within the cells of the nervous system as well as in the circulatory system of its host. They can maximize the host's longevity by covering their body and bind to their peripheral nervous system instead of inhabiting their internal organs. Their influence can also alter the host's DNA, as shown in the case of Goku Uniforms and Kamui (both that are made of Life Fibers) which endow the wearer superhuman abilities and their role in humanity's course of evolution.

Despite being sapient entities capable of making decisions and thinking, majorities of Life Fibers in the series mostly displayed much instinctive and feral mindset, making them susceptible to be submitted by the host's willpower as shown through Junketsu. Yet, they posssess surprising ability to rapidly evolve to gain new abilities (usually through certain stimuli such as life-threatening situations) which allows them to overcome this shortcomings. The only Life Fiber-based entities who capable of high reasoning are Senketsu and Nui Harime, though only the former who have better sense of right and wrong as well as humanity that the latter lacked thanks to his time with Ryūko. Also, Senketsu is the only one who can communicate with others from start, though initially only limited to his partner Ryūko due to being infused with the latter's gene and it took him evolving further so he can do so with others. In the eyes of Ragyō Kiryūin, Life Fibers are a collective of all-powerful deity and rightful rulers of the universe, yet this is not the case owing to her insanity and Life Fibers' own nature as mere parasites. Regardless, their ability to rapidly evolve is one reason why Life Fibers are considered dangerous.

Life Fibers reproduce across the galaxy through a series of steps. After finding a planet with intelligent life suitable for their purposes, they begin subtly manipulating the evolution of a select species, creating a race that will become the dominant species on the planet. Once the selected species has dispersed across the planet and reached a certain stage of evolution, the Life Fibers will begin taking control of that species on the planet. When enough members of the species have been taken over by Life Fibers, they will take control of their hosts and rise into the stratosphere, creating a massive "cocoon" of Life Fibers that envelops the entire planet. This is known as the Celestial Cocoon Seed Planet, Cocoon Sphere Genesis, or Starseed Cocoon Sphere. In this form, the Life Fibers consume the planet's thermal energy to create new Life Fiber seeds. Once enough seeds have been created, the Life Fibers will cause the planet to explode, scattering the new generation of Life Fibers all across the cosmos in a kind of galactic diaspora. 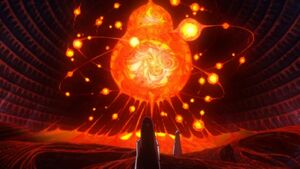 Origin
Add a photo to this gallery

Retrieved from "https://villains.fandom.com/wiki/Life_Fibers?oldid=3983608"
Community content is available under CC-BY-SA unless otherwise noted.