Thief, partners in crime
Lifty and Shifty are a pair of green raccoons appearing in the Happy Tree Friends series. To seperate the twins apart, Shifty wears a fedora hat like Henry Jones, but it's greenish-white- they are also kleptomaniacs, meaning they will steal anything that isn't nailed down (heck, even the stuff that is nailed down) -they have no qualms about what they steal or who from, they almost always end up being horribly killed as a result of their own misdeeds or simply because of bad luck. 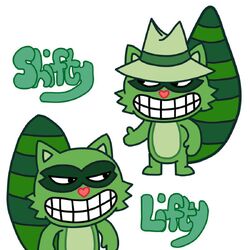 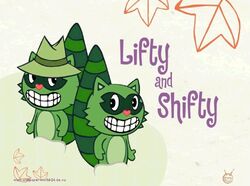 Add a photo to this gallery
Retrieved from "https://villains.fandom.com/wiki/Lifty_and_Shifty?oldid=450717"
Community content is available under CC-BY-SA unless otherwise noted.