Stealing items to use in her artwork.

Make Dexter become her "soulmate" or kill him and everyone he cares about if he doesn't (failed).

Lila West (real name Lila Tournay) is a character in DEXTER, serving as one of the two main antagonists of Season 2 (alongside James Doakes). She is a sociopath who hangs out in support groups to vicariously experience emotions she is incapable of feeling; it is there that she meets Dexter Morgan and becomes obsessed with him.

She is portrayed by Jaime Murray, who also portrayed the Black Fairy in Once Upon a Time, Carmilla Pines in Sleepy Hollow, and Nyssa al Ghul in Gotham.

Lila is a Sponsor for a Narcotics Anonymous Group for various types of addicts. She says that she is a recovering meth addict and pyromaniac who accidentally killed her boyfriend after setting fire to his apartment while high. She works as an artist, often stealing items to use in her work.

She meets Dexter Morgan after he joins the group at the behest of his girlfriend Rita Bennett, who believes he is addicted to heroin - unaware that Dexter is in fact a serial killer who murdered her abusive ex-husband Paul. Lila volunteers to be Dexter's sponsor, and senses right away that he is lying about being a heroin addict. She also senses a darkness in him that she can't define, and encourages him to let his guard down. When he tells her that he has found his mother's killer, Santos Jimenez, she advises him to seek closure - which he does by killing Jimenez. Afterwards, he runs to Lila for comfort, and they become lovers, breaking up his relationship with Rita.

Lila becomes possessive and erratic, however, at one point setting fire to her own loft to prove to Dexter that they are soulmates; she believes that are closest during times of crisis. When he breaks up with her, she retaliates by attacking Rita and her children Astor and Cody, setting their house on fire. When that doesn't win Dexter back, she ingests Rohypnol and has sex with Dexter's friend and coworker Angel Batista, framing him for date rape.

Dexter's foster sister Debra, a homicide detective who despises Lila, runs a background check on her and discovers that her real last name is West, and that she is residing in the U.S. illegally. Debra threatens to have Lila deported unless she leaves Dexter and Batista alone. Lila nevertheless keeps stalking Dexter, who has reconciled with Rita, and follows him to his cabin in the Florida Everglades, where he has coincidentally imprisoned his nemesis, Sgt. James Doakes. When Doakes tells her that Dexter is a serial killer, she decides to kill him in order to protect Dexter, and starts a propane fire that destroys the cabin and Doakes with it.

Dexter meets with Lila under the pretext of wanting to run away with her; he is in fact luring her in to kill her. She discovers the truth after finding knives and syringes in Dexter's overnight bag, and seeks revenge by kidnapping Astor and Cody, locking them in her loft and setting it on fire. Dexter saves the children, however, and Lila flees to Paris to escape him. Dexter soon tracks her there, however, and kills her by stabbing her in the heart. 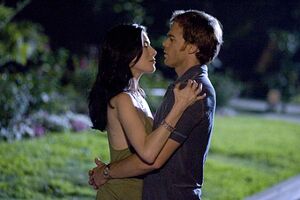 Lila with Dexter at night. 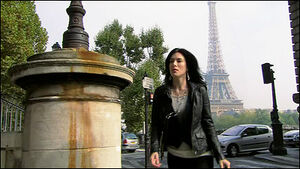 Lila in Paris during her attempt to escape Dexter's vengeance.

Dexter avenges James Doakes by stabbing Lila in the chest, killing her.