Villains Wiki
Register
Don't have an account?
Sign In
Advertisement
in: Female, Anti-Villain, Related to Hero,
and 17 more

Morrilith (name given by the fans in Marvel VS Capcom)

Jedah's servant (though she does not know)

Third of Morrigan's soul and power

To find and protect her true body.

Lilith Aensland is an anti-villainess from the Darkstalkers game series. She is a miniature succubus who was created from energy drawn from the succubus Morrigan. This dangerous excess energy was separated from Morrigan at birth by her father Belial, who sealed it away. The separated energy formed a mind of its own and named itself Lilith.

She is voiced by Hiroko Konishi in the Darkstalkers series and Miyuki Sawashiro in Onimusha Soul, while in Cross Edge, she was voiced in Japanese by former voice actress Yuka Imai, who previously voiced the character in Namco X Capcom, and voiced by Stephanie Sheh in English.

Belial, the ruler of all Makai and Morrigan's adoptive father, foresaw that Makai would be exposed to the crisis of perishing soon. Someone with great power would be needed to maintain the unbalanced world of Makai. Using his near omnipotent foresight, he predicted that one which such power would not be born in the family of Aensland for another 1,200 years. Knowing this, he personally selected Morrigan as his immediate heir.

Morrigan was a very special succubus; she was born as an "S class" noble. But at that time, a struggle for power had already started between the noble houses. Numerous battles had occurred in various locations. It was unacceptable for a Succubus child to be given such rights to power. To complicate matters further, Morrigan had no way to control the enormous powers that she held within herself. If she were to be left unguided, she would destroy herself and the land around her. Thus, Belial decided to split her powers and isolate them in order to protect her. Morrigan's soul was split into three, one of the parts was isolated in a negative space that Belial had specifically created.

Belial intended to return the sealed off portion to Morrigan when she was able to control her powers but died before he could. The sealed-off power had begun to have its own will, becoming Lilith. She had begun to recognize herself roughly a decade after the sealing process. As Lilith found out about Makai, her feelings grew. These feelings were different from normal emotions like admiration and jealousy, they were closer to a primitive instinct to return home.

In Darkstalkers 3, the demon Jedah Dohma releases Lilith and gives her a body - that of a smaller, more cheerful succubus. In return, Lilith was to lure Morrigan and the other Darkstalkers to him. Lilith seems to enjoy her life until she realizes that she is not the "original" - she is only a part of another person. She discovers that she often becomes transparent and realizes she has limited time to find her "soul mate", in order to continue her existence. Morrigan also feels that Lilith is a part of her, but she does not feel she needs Lilith as badly as Lilith needs her. Jedah realizes this, and he manipulates Lilith to meet Morrigan so he can use them both to extend his power. However, Lilith knows that Jedah is lying to her. Lilith is only absorbed by Morrigan in Morrigan's ending leaving Morrigan, like Lilith, with a more cheerful personality, a new view on the world and greater power. In Lilith's ending, she seems to fail to reach Morrigan's unconscious body in time and appears to fade from existence seconds before Morrigan wakes up, though Morrigan again seems to feel something has changed within her, meaning that Lilith actually succeeded in returning.

Role in the Vs. Series

Lilith constantly appears alongside Morrigan in the Versus Series. In Marvel VS Capcom: Clash of Super Heroes, she appears in Morrigan's intro-pose, where she enters her body again, and in one of her victory poses, and in her taunt, she also appears in the hyper combo Silhouette Blade. She is also a secret playable character in this game, where she mind-swaps with Morrigan. Being a Palette-swap in this game, she is constantly called Morrilith or Liligan by the players.

In Marvel VS Capcom 3: Fate of Two Worlds and Ultimate Marvel VS Capcom 3, a shadowy figure Lilith's silhouette appears in Morrigan's Shadow Servant hyper combo, which is basically the same as Silhouette Blade. She also makes cameo appearances in some endings.

In Namco X Capcom, Lilith is given a major role, as she is also searching for her true body, but its manipulated by Lord Raptor and his allies to fight the player's party. She later becomes playable.

In Cross Edge, she appears as a boss alongside Demitri, but later becomes playable.

In Capcom Fighting Evolution, she appears in Felicia's ending. 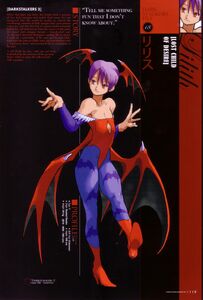 Lilith in Marvel VS Capcom 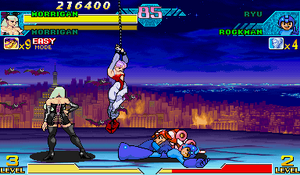 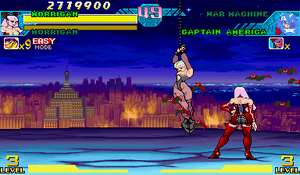 Winning pose in Marvel Vs Capcom Clash of Super Heroes for Morrilith/Liligan showing a defeated Morrigan.