Seek retribution against both Adam and Eve for her banishment from the Garden of Eden.

Lilith (/ˈlɪlɪθ/; in Hebrew: לִילִית‎ Lîlîṯ), also sometimes known as "Lilit", is (according to some Jewish folklore) the original wife of the first human male Adam who was given to him prior to Eve but came into conflict with Adam (and by extension, God) via defying their wishes - after her expulsion from the fabled Garden of Eden on Earth, she would proceed along the path of degeneration and become a seductive demon akin to a succubus who would mother many demonic offspring and abandon her once divine origins.

To correct this, God created Eve, who ultimately would prove to be treacherous as well by giving in to the Serpent's trickery and feeding Adam the forbidden fruit from the Tree of Knowledge - causing the legendary "Fall from Grace".

As for the fate of Lilith, according to tradition, she stalks the land as a powerful demon and Jewish folklore often tells of how children are given special amulets to defend themselves against Lilith and her demon-spawn (these amulets are inscribed with the names of angels as a form of divine protection).

As with all religious folklores, there is a continued and heated debate as to whether of not Lilith was an actual story in the Bible or merely a creature thought up by Jewish scholars as a means of warning against the dangers of lust and faithlessness. It should be noted the oldest confirmed story that presents her as Adam's original wife and being cast out due to disobedience only dates back to the 9th century CE and is a text commonly agreed by most scholars as being satirical due to its constant use of raunchy language.

In some earlier stories, Lilith was just a monster who murdered children and/or seduced men and had no connection to Adam (although there is one confirmed earlier story, of her impersonating Eve to trick Adam into sleeping with her).

As such said stories about Lilith are generally regarded by most religious followings as Apocryphal.

Lilith is sometimes regarded as the embodiment of the Deadly Sin of Lust as if according to the Seven Deadly Sins. 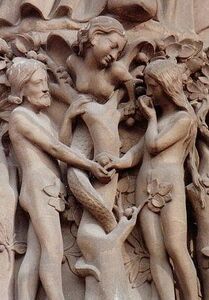 The Notre-Dame's stone inscription of Lilith as The Serpent, deceiving both Adam and Eve in the Garden of Eden. 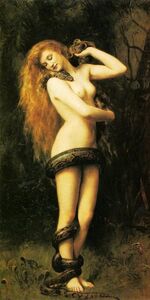 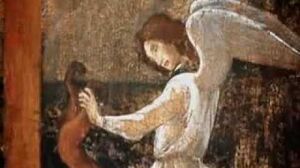