Lilith the Doll, also called "Lilith" and "Lily", is a cursed doll and the main antagonist of the 2014 SyFy Channel movie Finders Keepers.

Lilith is a muñeca quitapena (worry doll or trouble doll), a type of doll made in Guatemala that, according to old South American tradition, can absorb all of the stress and worries projected by a child, thus allowing that boy or girl to sleep peacefully. 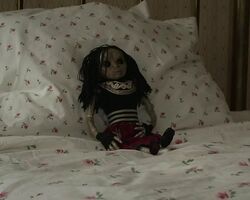 Lily the Doll
Add a photo to this gallery

Retrieved from "https://villains.fandom.com/wiki/Lilith_the_Doll?oldid=3917935"
Community content is available under CC-BY-SA unless otherwise noted.