Lilith, The Succubus or The Incubus, "Lilith the Succubus" or "Lilith the Incubus, is the one-shot antagonist of TV show Sleepy Hollow. She is a demon servant of Moloch, whose heart is stored away from its body. It is drawn to secret desires, and is able to mimic them.

In "Heartless", Henry Parrish summoned Lilith, where she took the appearance of an attractive young lady, sucking the life force out of both male and female victims in public places.

Nick Hawley was almost killed by the Succubus, but was rescued by Abbie Mills and Ichabod Crane.

The Succubus lured Ichabod into another room, and trid to play on his desire for Katrina and steal his soul. Hawley broke into save him, but the demon instead turned on him. Grapping Hawley's gun, Ichabod fired a consecrated bullet into the demon. With her heart burned down by Abbie, the Succubus met her demise.

However, even though Ichabod and Abbie killed her, Lilith's work was already done, as she had absorbed enough life force to bring Moloch into the world—as a seemingly innocent-looking human baby. 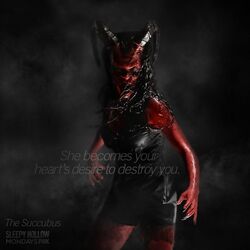