Talking to those whom she easily cursed.

Getting along with either those whom she deeply care for or intended victims.
Feeding on people's positive feelings such as decency and kindness.
Making her victims live and suffer through their idea of hell.

Recreate people's worst nightmares via hallucinations and then kill them.

Lillith "Lily" Sullivan is a demonic little girl and the eponymous main antagonist of the 2009 psychological horror movie Case 39.

She was portrayed by Jodelle Ferland, who also played Alessa Gillespie in the film Silent Hill based on the best-selling Silent Hill videogame series, and Bree Tanner in the Twilight Saga: Eclipse.

Lillith "Lily" Sullivan was born to Edward "Eddie" Sullivan and Margaret Sullivan in August 1997 and they were a family but only for a decade; strange and terrible things happen to the Sullivan family as Margaret's two healthy brothers named Bret and Travis, and Edward's three sisters, all suddenly died strangely since her birth and both Lilith's parents were still alive but they blamed her for their fatalities and they even feared and hated her.

Social worker Emily Jenkins is assigned to investigate her 39th case, the family of the 10-year-old child Lillith Sullivan, as her grades in school have declined from As to Ds and an emotional rift with her parents has emerged. Emily suspects that the parents have been mistreating Lillith. Emily's fears are confirmed when Lillith's parents try to kill her by roasting her in the oven at home, even mentioned they were going to send her to hell. Emily saves Lillith with the help of Detective Mike Barron. Lillith is originally sent to a children's home, but she begs Emily to look after her instead. With the agreement of the board, Emily is assigned to take care of Lillith until a suitable foster family comes along. In the meantime, Lillith's parents, Edward and Margaret, are placed in a mental institution.

Not too long after Lillith moves in, strange things begin to happen around Emily. Two weeks later, another of Emily's cases, a boy named Diego, suddenly murders his parents Javier and Juanita in their sleep in the dead of the night, and Barron informs Emily that somebody phoned Diego from her house the night before the crime. As she is suspected of involvement in the incident, Lillith undergoes a psychiatric evaluation by Emily's best friend, Douglas J. Ames. During the session, however, Lillith turns the evaluation around, asking Douglas what his fears are and subtly threatening him. That night, Douglas receives a strange phone call and is panicked by a mass of hornets coming out of his body; in hysteria, he kills himself in his bathroom.

Emily gradually becomes fearful of Lillith, so she heads to the mental asylum for answers from Lillith's parents. Only Margaret has been put in restraint in her cell, leaving Edward under close watch from guards tell her that Lillith is a demon who feeds on emotion (especially and specifically positive emotion such as goodness, kindness and decency), and that they tried to kill her in an attempt to save themselves. He tells Emily that the only way to kill Lillith is to get her to sleep. Shortly after Emily leaves the asylum, Lillith's mother is fatally burnt (similar to what Lillith felt during her parents' attempt to destroy her) and her father is stabbed in the eye after attacking a fellow inmate through whom the voice of Lillith spoke. Barron initially thinks Emily should seek psychiatric help, but is later convinced when he receives a strange phone call in his home from Lillith. He arms himself to help Emily. However, he inadvertently shoots himself in the head with a shotgun when Lilith makes him imagine he is being attacked by dogs.

After realizing that her closest colleagues have been eliminated, and that the rest of her cases will be next, Emily serves Lillith tea spiked with sedative. While Lillith is asleep, Emily sets fire to her house, hoping to get rid of her. However, the girl escapes unharmed. A police officer escorts Emily and Lillith to a temporary place to sleep. As Emily is following the police cars, she suddenly takes a different route and drives her car at a high speed, hoping to bring fear to Lillith. Instead, Lillith forces Emily to relive her childhood memory of her mother driving fast in a rainstorm. Emily fights through the memory, telling herself that it is not real. The image fades, and Lillith appears scared by the fact that Emily was able to fight through her illusion.

Emily drives the car off a pier. As the car sinks, Emily struggles to lock Lillith (now in her natural demon form) in the trunk. Emily then attempts to swim to the surface. However, the demon grabs Emily's foot to stop her swim away. Emily struggles and eventually breaks free as a trapped Lillith sinks to the bottom. Emily climbs atop the pier and attempts to recover from the ordeal.

An alternate ending can be found on the DVD as a deleted scene in the Special Features section. In the alternate ending, Emily careens through the harbor gate and drives the car off the pier into the Bay just as in the theatrical ending. The car sinks to the bottom and fills with water. Suddenly, a man swims down to the car, opens Lillith's door, and carries her to the surface, leaving Emily behind. Emily tries unsuccessfully to open her door but begins to pass out. Suddenly, the man reappears and frees her, too. As the ambulance carries Emily away, a news broadcast details the event. Margaret Sullivan who was still alive somehow, can be seen watching it. In the final scenes, Emily frantically pleads with her lawyer to tell her where Lillith is, while Lillith arrives at the home of her new foster family from Cloverfield in California (as mentioned in the film earlier) and turns to wink at the camera sadistically as her cycle of cruelty begins to repeat itself.

Lilly's real identity known to the internet as "The Demon" is not revealed. The only proof about is that she was a demon was Eddie's comments about her and when she transformed into a demon at the end. It is most likely that whatever the entity is, it has been around for a long time and, for generations, has been moving into new families or other people and killing them and moving on by disguising as "Lilly" and making her guardians look like her killers. Although in the film it disguises as a girl, the entity's sex is most likely male: when we see it in the end, it's squeal sounds masculine rather than feminine and even Diego says that, when Emily's daughter called him, he answered to a man; also, when Emily tells Lilly to get out of her house, Lilly gets up and her face turns like a demon's, it looks like the face of a man. The demon's voice sounds as if it changes all the time from Lilly's to a deep kind of woman's voice to its most possible real voice which is heard on a phone call when a deep woman's voice says "Everytime I think about it a voice in my head says..." and then reveals its real voice saying "kill them!'" in a deep dark cold old sounding voice, and when it breaks throw the door saying "Emily!" very angrily and dark and deep. It follows the sentence with "Most families don't even know they have a problem... until it’s too late." in a deep male voice. Its face is grey and like a circle. Its skin is dark grey and has pitch-black eyes and red lips with sharp teeth. Its hands are very big and, like its face, grey. It has finger nails sharp enough probably to scrape someone. The demon most likely dies in 2009 at the end of the film when Emily drowns it at the bottom at the end. 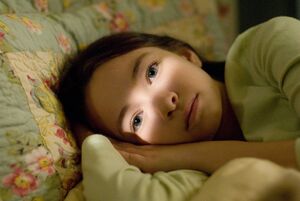 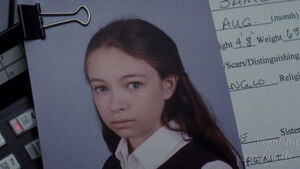 A file on Lillith "Lily" Sullivan. 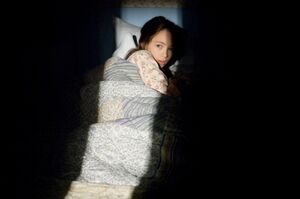 Retrieved from "https://villains.fandom.com/wiki/Lillith_%22Lily%22_Sullivan?oldid=4297781"
Community content is available under CC-BY-SA unless otherwise noted.