To become human (succeeded, then failed).

Lilly D was an evil life-like doll in The Haunting Hour. Lilly D wants to be human and gain what a doll can never have: love.

A spoiled girl named Lilly manipulates her father into buying her a is life-sized "Really You" doll she names Lilly D. Lilly quickly becomes over-possessive about Lilly D, even going as far as ripping the leg off a friend's doll after the friend informs Lilly that Lilly D hates her. Soon after, strange events begin to occur which Lilly's mother believes Lilly is doing. Lilly's mother starts to care more about Lilly D than Lilly: giving the doll breakfast and letting it sleep in her bed, the final straw being when Lilly's mother is convinced Lilly painted "Bad Girl" on her bedroom room wall, even though Lilly is once again denying her guilt; and Lilly's brother, Brandon tells his friend, Josh that he will prove Lilly D is truly alive, or isn't, by placing a video camera to watch the doll throughout the night.

After the memory card for the camera goes missing, Brandon and Josh take apart Lilly D, and finds words on the back of her head reading "Destroy this Doll." Brandon and Josh try to solve the mystery by going to the Really You building. There, the boys meet the doll maker who works in the basement. She tells them that all dolls have souls and individual personalities, but are content to be with what they are. However, the doll that became Lilly D did not want to be a doll, thus she became a "bad girl". The maker tried to destroy her, but nobody believed her.

Lilly becomes mysteriously ill and sore, but she and her mother continue to argue, finally ending when Lilly's mother says that she wishes Lilly D was her daughter. Lilly D becomes human, and Lilly turns into a doll. Brandon is the only one to see that something is off when "Lilly" acts polite and thoughtful. The next day, Brandon notices the discarded doll thrown in the garbage has Lily's birthmark on the back of her neck, something that Lilly D couldn't have. Brandon shows this to his mother, and Lilly is restored to her normal self by her mother's love for her.

Lilly D is a doll again, but is hit by a garbage truck after trying to get back up. The doll is seen on the side of a street by two girls. She grabs one of the girls, causing them to run away in terror.

The Return of Lilly D

Sometime after her defeat, she is found by two boys who briefly hassle her before this is witnessed by a little girl named Natalie. Natalie gets them to stop and gets Lilly D for herself. Natalie, who shows a quick love for the doll, takes her home and gets shows her to her grandfather. The doll is sent back to the company where she was created. When the Doll Maker sees her, she is initially frightened by Lilly D but relents when she finds a softer presence within the doll and has her fixed. She redelivers the doll to Natalie, who the doll maker see's as a good influence on Lilly D. The Doll Maker tells Natalie and her grandfather about the dolls having souls (which Natalie's grandfather finds crazy). The other dolls warn the Doll Maker that Lilly D is still evil and that Natalie is in danger. The Doll Maker attempts to steal Lilly D back but the doll drops a fish bowl on her head, but it doesn't kill her. As the other dolls foreshadowed, Lilly D begins to show darker traits shortly after the Doll Maker's attack. Natalie finds a wounded baby bird and tries nursing it back to health but Lilly D shows extreme jealousy and late at night tries to abduct and drown the baby bird but is stopped when Natalie wakes up and Lilly D's secret is revealed. While Natalie's grandfather was in his wheel chair, Lilly D stalks him through the dark halls and knocks him off the wheel chair. Natalie briefly rushes to her grandfather's aid before confronting Lilly D in the kitchen. The doll attempts to stab Natalie with a knife but is disarmed and decapitated by Natalie using a frying pan. 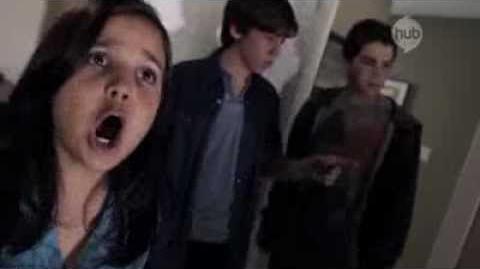 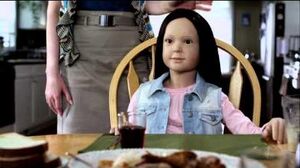 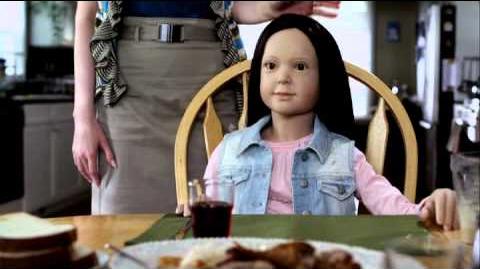 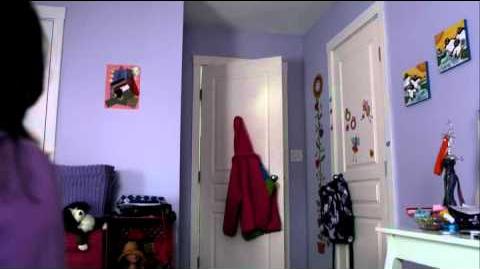 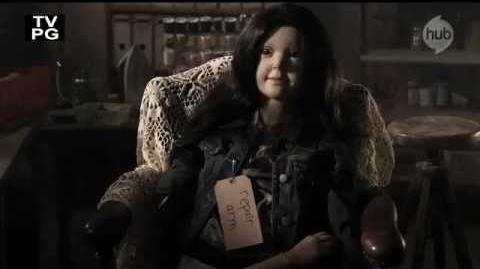 R.L Stine's The Haunting Hour The Series - Return of Lilly D (Promo)
Add a photo to this gallery
Retrieved from "https://villains.fandom.com/wiki/Lilly_D?oldid=4146247"
Community content is available under CC-BY-SA unless otherwise noted.