Villains Wiki
Register
Don't have an account?
Sign In
Advertisement
in: Planet of the Apes Villains, Businessmen, Science Fiction Villains,
and 17 more

Limbo (Planet of the Apes)

Limbo was a major antagonist in the 2001 Tim Burton remake of Planet of the Apes. He is an orangutan trader of human slaves who was placed in charge of Leo, Daena, Karubi and the other captives. Limbo was cheap and shrewd in business practices. When negotiating the price for a newly captured group of humans, he joked of the humans having lice, Limbo figured he would have to make his money on volume selling with such poor specimens.

He was portrayed by Paul Giamatti, who also portrayed Rhino in The Amazing Spider-Man, Beauty Smith in White Fang, Stan Beals in The Ant Bully, Marty Wolf in Big Fat Liar, Chairman Drek in Ratchet & Clank, Karl Hertz in Shoot 'Em Up, and Dr. Satan in The Haunted World of El Superbeasto.

When new humans including the stranded US Air Force pilot Captain Leo Davidson who works closely with primates trained for space missions and was searching favorite chimpanzee co-worker named Pericles, arrived at his training compound in the city, Limbo instructed his gorilla guards to "Get them out and get them clean!". If only his assistant would remember to wear his gloves while dealing with humans, sanitation conditions would be better. Limbo gave a human child to General Thade as a birthday gift for Thade's niece. Such a kickback to someone in power was a cost of doing business to Limbo.

Later he tried to recapture the escaped slaves but was taken prisoner by them and forced to accompany them to the wreck of the Oberon. Limbo learned what it was like to be a slave and to be human. In the end after the the battle at the forbidden ruins of Calima, Limbo pondered a future world of trade with humans as he was not a principled ape, and while he was happy with the old order, he would adapt to any situation where he could make money. 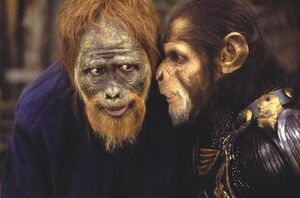 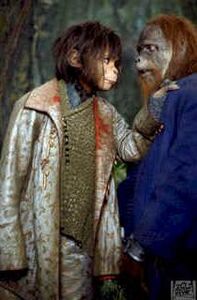