Lin Sue is a young woman who worked at the Blue Ribbon Laundry Factory owned by Mr. Bill Gartley who developed a romantic relationship with her, and a minor villainess in the 1995 Stephen King thriller The Mangler.

She was portrayed by Lisa Morris.

Lin Sue began her first day of work at the Blue Ribbon factory as a laundry maid. At first, she was seen by other workers including Bill Gartley's niece Sherry as somewhat snobbish and arrogant.

After the deaths of 2 workers in freak accidents, Lin Sue who was panicking and could not stand the carnage, suddenly develops a romantic relationship with Mr. Gartley. Later, Lin Sue was attacked and had her 2 fingers chopped off the Mangler, a laundry press machine that is possessed by a bloodthirsty demon. Gartley knows full well that there is a demon inside the mangler. He even shows his protegee Lin Sue the contract he signed with the entity.

Later, Officer Hunton finds a scrapbook in which Garley has been keeping photos of various girls, all daughters of rich Riker's Valley, Maine residents. Presumably, the demon in the speed ironer has been providing them all with success and riches in return for the sacrifice of their daughters on their 16th birthdays.

Lin Sue than helped Gartrley kidnapped Sherry and took her back to the factry so she can sacrificed to the demon inside the mangler on her 16th birthday. Detective John Hunton and his brother-in-law Mark Jackson stopped them both and Lin Sue during the ensuing struggle ended being killed by the Mangler. 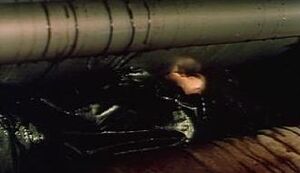 Lin Sue is being crushed and killed by the Mangler.
Add a photo to this gallery

Retrieved from "https://villains.fandom.com/wiki/Lin_Sue?oldid=3060223"
Community content is available under CC-BY-SA unless otherwise noted.