Prove that Kira is real (under L's orders)

Lind L. Tailor is a minor, yet pivotal antagonist from Death Note series. Lind is a convicted criminal sentenced to death. He is used by L to determine Kira's location. He was used as a decoy on television, the network states that the broadcast is worldwide and that Tailor's statements are being translated into Japanese by Yoshio Anderson.

Lind L.Tailor was arrested in Texas in 1999 for for charges of sexual assault and murder. He was later sentenced found guilty and put on death row in 2005 for said charges.

Continuous deaths among Japanese criminals that involve heart attacks lead many people to believe that there is a supernatural murderer whom they dub "Kira." The epidemic of heart attacks attract the attention of law enforcement and eventually the supposedly greatest detective in the world, L, is eventually brought in to investigate. L decides to go on national television and reveal his name to be Lind L. Tailor. After Lind states that he is "L," he declares that Kira is evil. Light Yagami, enraged by this, kills Tailor using the Death Note with a heart attack. The broadcast of Tailor is suddenly cut, and L's signature letter with the same name appears. Using a voice changer, the true L announces that Tailor was a decoy and a criminal with capital punishment. He then reveals that the broadcast was only shown in the Kantou, Japan which lead to L finding out Kira's general location. 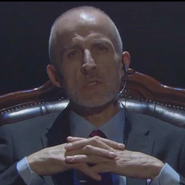 Tailor in live-action
Add a photo to this gallery

Retrieved from "https://villains.fandom.com/wiki/Lind_L._Tailor?oldid=3842899"
Community content is available under CC-BY-SA unless otherwise noted.