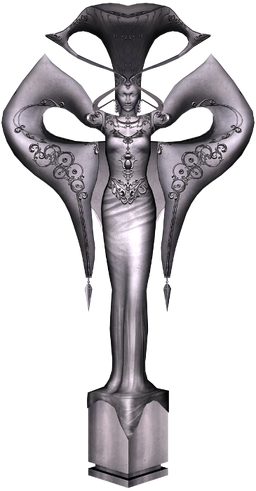 According to the official Fabula Nova Crystallis: Final Fantasy mythology, Lindzei was created by the god Bhunivelze who had destroyed his mother, Mwynn, to become the sole ruler of the world. Mwynn was banished in the realm of the dead but afterward, Bhunivelze came to believe Mwynn had cursed the world to mean all things would one day die, including him. Bhunivelze wanted to destroy Mwynn in the realm of the dead and created three fal'Cie of his own: Pulse, Etro and Lindzei. Even though the mythology calls the three "fal'Cie", they are known as gods by the people of the world of Final Fantasy XIII.

While Pulse was tasked with creating the world of Final Fantasy XIII and to find the door to the realm of the dead, and Etro was given no powers at all, Lindzei was tasked with protecting Bhunivelze from all who might want to destroy him. Bhunivelze crystallized himself to sleep until his creations would find a way for him to enter the world of the dead. Before doing this Bhunivelze gave Lindzei a special task: to wake him once the time would come.

Lindzei and Pulse created many fal'Cie of their own; Pulse to expand the world, and Lindzei to protect it. As revealed in Final Fantasy XIII-2 Fragments After, Lindzei played a role in humanity's creation by using Etro's spilled blood after she sacrificed herself to attract their creator's attention. Lindzei came to be worshiped as mankind's protector while Etro became known as the Goddess of Death.

Lindzei is first mentioned in the Analects as the creator of Cocoon. As the Analects are written from the Gran Pulse citizens' perspective, Lindzei is portrayed with contempt, referred to as the "serpent", "viper", the "Succubus", the "demon", and "Fell Lindzei". Fang also refers to Lindzei as a "trickster" in Lightning Returns.

According to the Analects, Lindzei created Cocoon from pieces of land taken from Gran Pulse's soil. Lindzei bore other fal'Cie within Cocoon and invited mankind to live there, calling it paradise. Those who remained on Gran Pulse believed those who live in Cocoon are no more than Lindzei's slaves. The VIII. Analect records that Lindzei left Cocoon and the fal'Cie, betraying them altogether and leaving them orphaned.

While a parody of Lindzei manifests in Orphan's first form out of a subconscious yet sinister vision by the assimilated Barthandelus, as detailed in Final Fantasy XIII Ultimania Omega, Lindzei personally manifests during Lightning's battle with Bhunivelze, transforming into a half of a twin scythe for him to use.

In Final Fantasy Type-0, Lindzei is the creator of the Lulusathian Army. Led by the Lulusathian Judge Gala, the Army appears whenever one of the four nations of Orience becomes a world power to slaughter every human in an attempt to force open Etro's Gate with a flood of souls, before selecting a l'Cie Arbiter of Lulusath that invokes Finis to reset the world to begin the cycle anew. In the events of Type-0, after Suzaku conquers the rest of Orience, the army is summoned before Gala calls off his forces when Pulse's servant Arecia Al-Rashia reveals the Suzaku students she picked to become Agito to open Etro's Gate have turned down the chance to become l'Cie. This alters the chain of events with the l'Cie Arbiter of the cycle, Cid Aulstyne, destroyed by Class Zero. While Gala's fate is left unknown, Arecia removed the crystals from Orience with the need for the Lulusathian Army no longer needed.

Retrieved from "https://villains.fandom.com/wiki/Lindzei?oldid=3549844"
Community content is available under CC-BY-SA unless otherwise noted.