Club owner of the Fight Palace

Commanding his minions Riff and Skozz.

Devour the whole village of sheep.

Get revenge on Khampa for defeating his pack and making them timid to trespass the village.
Kill Bodi (all failed).

Linnux is the main antagonist in the 2016 Chinese-American computer-animated comedy film Rock Dog. He is the CEO of Linnux Industries and Khampa's arch-nemesis.

Linnux is a morose and demanding husky who wants his orders to be executed with success and is quick to punish those who fail him. He is quick to anger, as he gets mad over a little problem such as a red phone with an unmatched black cord. He is shown to have a sadistic side, as shown when he finds pleasure in the suffering and pain of others. He also enjoys seeing Khampa and Fleetwood unable to escape, and sending the crocodile fighter to battle The Grizz, which is known to leave fighters on deplorable conditions and to "never be seen again".

Not much is known about Linnux's origins, he has a mother who seems to be as violent as he is, and he has been leading the dog pack for years.

He attacked Snow Mountain years ago and was quickly defeated by Khampa with the power of the Deadly Mastiff Paw, and this further fueled Khampa's need to protect the village by building the sheep army with fake dog costumes which have proven to be working, as Linnux and the rest of the dog pack think they are actual soldiers and therefore do not invade Snow Mountain but that doesn't stop Linnux from coming up with plans to do so.

After Bodi leaves Snow Mountain, he quickly orders agents Riff and Skozz to trace him down and kidnap him, in order to get all the information they need to successfully raid Khampa's army and get the sheep.

Riff and Skozz are not as efficient as he would want them to be, as they fail twice to capture Bodi, by getting hurt the first try and capturing Angus Scattergood the second time by mistake.

However, Riff proves to be successful, as the whole dog pack fails to aim correctly at Bodi when confronting him at Rock 'n' Roll Park, but only his dart hitting him. Skozz's dart gun malfunctions, until it fires a single dart upward, only to come down and hit Riff, knocking him unconscious.

After succeeding at kidnapping Bodi, Linnux begin questioning him, and thanks to the sleeping serum, Bodi reveals that the army dogs are actually sheep. Looking at the photos that Linnux keeps on a wall on his office, he finds out that all the other soldiers, except Khampa, are sheep in costume.

Bodi in a desperate attempt to prevent them to get to Snow Mountain, tries to reason with Linnux, but fails. Instead, Linnux sends him to the Fight Palace to battle The Grizz, an enormous bear that works at the boxing stadium that Linnux owns, in order to get rid of Bodi.

At Snow Mountain, he quickly disarms Khampa by tying him up, he does not notice that Carl is running away to alert the village, but again, the sheep fail to find a good hiding spot and are found. Linnux ties both Khampa and Fleetwood Yak onto chairs, so they can watch the sheep being cooked. However, the barbecue is cut short, as Bodi interrupts and is chased by the other dogs.

Bodi's attack proves useful, as he quickly disarms the wolves and manages to put everyone into a soothing state, minus Linnux, who is defeated by Khampa.

His whereabouts after Khampa's attack are unknown, but the rest of the dogs seem to have become peaceful and friendly, leaving him without his henchmen. 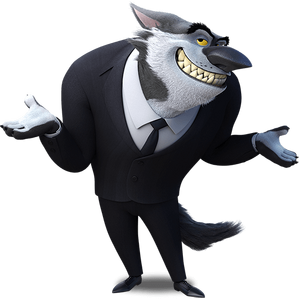 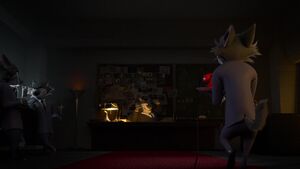 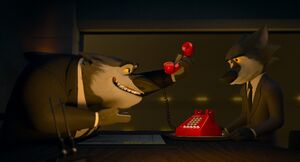 "Can we get a red cord to go with the red phone? Come on!" 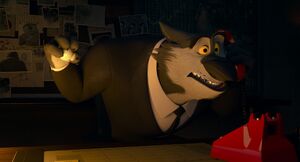 "What? A mastiff is leaving Snow Mountain?" 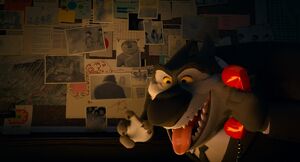 "Well, why are you still talking to me? Don't let him out of your sight! Bring him to me. We get him, we get Snow Mountain." 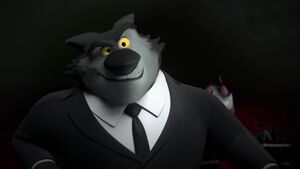 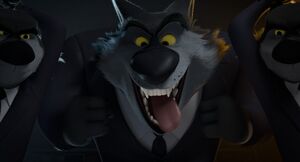 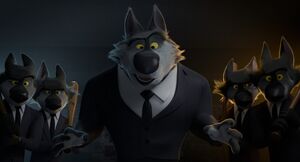 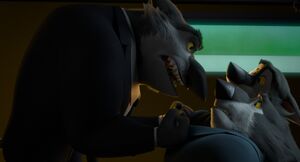 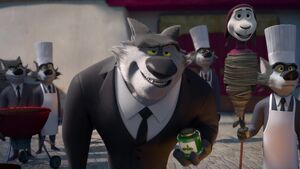 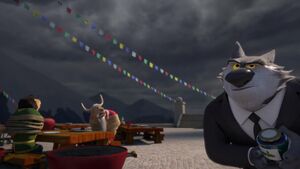 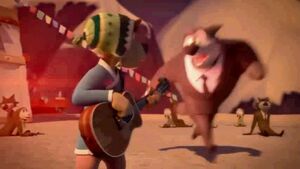 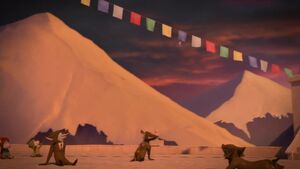 Retrieved from "https://villains.fandom.com/wiki/Linnux?oldid=3915777"
Community content is available under CC-BY-SA unless otherwise noted.