Get his ship repaired.

Alien
Linx is a Commander of the Fifth Sontaran Army Space Fleet and the main antagonist of the Doctor Who episode The Time Warrior.

Whilst battling against a Rutan squadron near the Sol system, Linx was forced to abandon his battle ship and take his scout ship to 13th century Earth for repairs. He allied with a robber baron named Irongron who offered the Sontaran shelter in return for advanced weaponry.

To get his ship repaired, Linx abducted scientists from the late 20th century to repair it and later went with Irongron to watch the attack upon Edward of Wessex for his own amusement.

Irongron pestred an intolerant Linx for weaponry and eventually given the gun he desired. Following a fist fight with The Third Doctor, Linx tried to escape, but was killed when he was shot in his probic vent by an arrow. 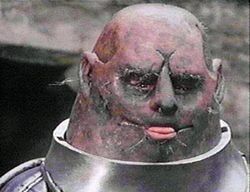 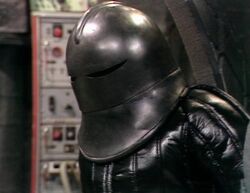 Linx wearing his helmet.
Add a photo to this gallery

Retrieved from "https://villains.fandom.com/wiki/Linx?oldid=3308395"
Community content is available under CC-BY-SA unless otherwise noted.