Make Cash do his bidding.

Lionel Starkweather, also known as "The Director", is the main antagonist of the controversial Rockstar game Manhunt.

Starkweather is a famous former movie director, who began filming pornography and snuff films after his career ended. He abducts James Earl Cash, the game's protagonist, and forces him to star in one of his movies by killing various dangerous and mentally unstable gangs, before eventually betraying him, ordering his family's murder, and attempting to have him killed. He is ultimately killed by Cash and his crimes are exposed.

He was voiced by Brian Cox, who also played Hannibal Lecter in Mindhunter, William Stryker in X2, Agamemnon in Troy, Scolar Visari in Killzone, Hermann Goering in Nuremberg, Pariah Dark in Danny Phantom: Reign Storm, and Ward Abbott in the Jason Bourne franchise.

Lionel Starkweather was once a successful Hollywood (or more likely Vinewood) film director until his movies started to flop badly and his career was finished, before moving to Carcer City and going insane. He begun filming underground pornography and snuff films, which he sold to certain Japanese businessmen.

His new found success made him very rich, allowing him to open a company named Valiant Video Enterprises with Mr. Nasty producing his films and begun hiring people to help him. He even found those responsible for his previous failure and got his revenge by adding them into his movies where they were all killed.

Starkweather begun paying off the CCPD, including the chief of police Gary Schaffer, allowing him to control the city and all the gangs participating in his snuff films took over the streets. With all this power Starkweather then remained isolated in his mansion, watching everything through security cameras and paying people to do all of the work.

At one point, a journalist decided to investigate Lionel Starkweather, looking for evidence that could implicate him in making snuff films.

At some point, a Journalist discovered Starkweather's snuff film ring and begun gathering evidence against him. Meanwhile Starkweather found out about James Earl Cash and decided to make a movie starring him, so he bribes the police and prison officials to save him from death row.

Cash is given an earpiece so Starkweather can talk to him and he instructs him to kill many gang members, while Starkweather watches and films it through security cameras. He also has many parts of the city blocked off by electric fences which he can open once Cash has completed a task. He has the Cerberus group take Cash to each location and Ramirez organize the Hunters.

He soon has Cash's Family kidnapped by the Wardogs, so Cash attempts to save them. Starkweather agrees to allow Cash to save them, as long as he can do so without being spotted by their abductors. Once he does rescue them, Starkweather has the rest of the family members killed anyway by a Babyface and shows the footage to Cash. Nearing the end of the film, Cash is set to die but fights back and escapes. Starkweather informs Ramirez to stop him but fails and is killed. He then has Gary Schaffer send police after Cash and the Journalist. Shortly afterwards, things begin to to go wrong for Starkweather when one of his former stars (Piggsy) escapes from his confinement and begins to massacre his Cerberus army.

Cash soon breaks into Starkweather’s Estate and begins to massacre his army himself. After he kills Piggsy, Cash then enters Starkweather's office. Starkweather attempts to defend himself from Cash with a revolver, but fails. He attempts to reason with Cash by pointing out that he made him a celebrity, but Cash refuses to listen to him and kills him gruesomely with his chainsaw.

He appears to be in his late forties, overweight and wears a large white towel around his neck and a golden necklace. He also wears a purple Hawaiian shirt with nothing under it, grey shorts with a leather belt having a star-shaped metal buckle, black slippers and sunglasses.

Lionel Starkweather was once a hardworking and famous film director, who was praised for his talent and admired by every critic. However, deep down, Starkweather had sociopathic traits. When Starkweather's career came to an end, he became completely insane. He plotted his revenge on the people that were responsible for the downfall of his career, and eventually made them all star in his snuff movies, resulting in their deaths.

Though he does not directly engage in violence himself, Starkweather presents himself as an extremely malevolent, depraved, cruel, sadistic, inhumane, immature, rude, disgusting, unpleasant, and perverted individual with an utter lack of morals. He particularly enjoys the suffering of others, which make him extremely sadistic and misanthropic. He treats everyone, including his soldiers, as mere pawns for his horrific snuff films.

Starkweather appears to be very impatient and temperamental, and shows no regard towards anyone's death. He gets very excited when Cash kills and annoyed when Cash waits around too long.

Regardless of his power, Starkweather is proven to be a coward, given by him begging for Cash to spare him, but only for Cash to ignore him. 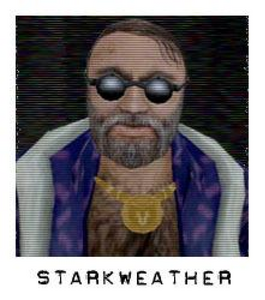 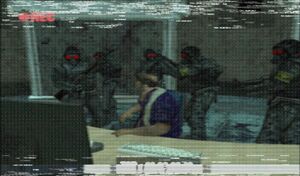 Starkweather and the Cerberus. 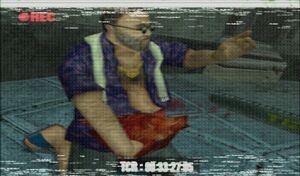