Resident of the Further

Lure innocent children into the Further for their souls and to use their own bodies in order to pass to the real world from the Further and to cause pain and death to others (all presumably failed).

The Lipstick-Face Demon, also known as the Man With Fire on his Face, the Red-Faced Man, Sixtass, or simply the Demon, is the main antagonist of Insidious horror film series. It is a demonic resident of The Further that seeks to bring pain and chaos to the world of the living by possessing a human body.

It was portrayed by the film's musician and composer Joseph Bishara, who also played Bathsheba Sherman in The Conjuring.

In the film Insidious, the Demon targets Dalton Lambert, a child that has the supernatural ability to astral project, because of his innocence and his spiritual energy. He lures him to the Further and manages to capture him (shown by Dalton drawing pictures of the Demon and the Red Door that leads to his lair) and chain him to the floor, where Dalton was presumably tortured and harmed.

When Josh enters the Further, he makes his way into the Demon's Lair and reunites with Dalton before unchaining him from the floor, but he is caught by the Demon, who is in the opposite room sharpening his claws, and attacks the two. Dalton and Josh run for their lives out of the Lair while the Demon pursues them. Dalton hides in his parents bedroom but the Demon's clawed hand reaches out from under the bed and grabs Dalton. Dalton runs from the room, being chased by the Demon, but manages to escape.

The Red-faced Demon makes a cameo appearance in the end of Insidious Chapter 2. It shows that he took control of a little girl named Allison and scaring Elise as his crackling shadow was shown behind Allison's chair.

He appears at the end of the prequel Insidious: Chapter 3, also in a cameo appearance, when Elise returns home and prepares for bed. She finds her husband's sweater folded on the bed and smiles until her dog begins barking in the darkness. As she looks at the place where her dog is barking, the Demon pops out behind her.

Though the Demon never speaks in the film, it is capable of speaking, as Lorraine mentions that in a dream she spoke to it and it responded to her in words. When asked who it was, it responded that it was a visitor. When asked what it wants, it responded that it wanted Dalton. Lorraine claimed she could still hear its voice, implying that the Demon has a chilling voice. The Demon keeps Dalton close by in his home in the Further, which seems to be a theater-like chamber. The Demon has marionettes which it likes to play with. It also seems to enjoy sharpening its nails. The Demon hurts Dalton whenever he makes noise.

The Demon is a malevolent, ruthless and cruel individual who never gives up on his goal to take a child's soul; however, he failed to take Dalton when he finds his body in the real world, though the Demon eventually moves on to a new victim. During Dalton's imprisonment in the Demon's Lair, Dalton was chained to the floor, left alone, adding that the Demon can be both physically and mentally abusive to children.

One of the Demon's most interesting quirks is his odd love of Tiny Tim's "Tip-Toe Through the Tulips". In the first movie, he is seen listening to it while sharpening his nails. A boy from the Further is seen dancing to the same song earlier in the film. It is unclear what the significance of the song is to the residents the Further.

The Red-Face Demon is a tall, muscular being with black skin, coarse fur on his legs, dark cloven hooves and a devilish tail. His face is black with large tints of red because it paints red all over his face. The Demon has long, spidery claws at the end of his fingers and has large, demonic yellow-gold eyes with black pupils. He is easily distinguished by his red-painted face and a crackling sound that occurs upon his presence. 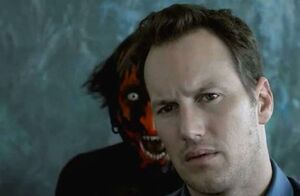 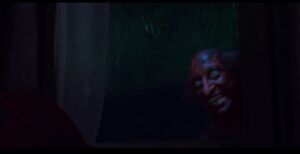