Kill his family and himself. (succeeded)

Lisa's Husband is the posthumous main antagonist of P.T., the Playable Teaser for the cancelled horror game Silent Hills. He is a serial killer who murdered his entire family and then presumably killed himself.

It is unknown exactly what led up the the serial killings, but according to the Baby, it possibly may be that the husband was fired from his job and resorted to drinking, and his wife Lisa had to get a job at a supermarket. However, they only kept her around because he "liked how she looked in a skirt". Lisa became pregnant afterwards, and it is unknown if this was her husband's or the manager's child.

However, this could not be the explanation, as it is unknown if the Baby was talking about Lisa's husband or the playable character of the game. Since this is still unknown, it is impossible to determine true origins and motivation.

However, from one of the messages written on the walls, Lisa's husband claimed there was a "monster" inside him, possibly implying that he was possessed by a spiritual or demonic entity to carry out the killings, as neighbors reported him chanting a series of numbers, and two other family murders were committed by fathers in the same house a month and a year prior to the latest. This may give evidence that the Baby's speech was referring to him, as drinking, the emotional stress of losing his job, and the possibility that the child Lisa was carrying was not his could have left him open to demonic manipulation. However, this is not fully known and some have speculated that he may have schizophrenia.

Lisa's husband purchased a rifle from his local gun store and stored it in the back of his car. Two days later, he retrieved the rifle and shot a pregnant Lisa in the stomach and eye, killing her and her unborn baby (which the Baby may or may not be a representation of). Alerted by the gunshots, Lisa and her husband's ten-year-old son came to investigate, and was also shot by his father. His six-year-old daughter fled and barricaded herself in the bathroom, but was lured out presumably when her father told her it was all just a game. He then proceeded to shoot her in the chest.

Neighbors called the police and had them quickly arrive, where they found Lisa's husband in his car listening to the radio.

However, at another point in the game, the radio says that he hung himself with a garden hose, so he either escaped police long enough to commit suicide, or the radio report details one of the previous serial killings. Another voice coming out of the radio during this report mentions him actually using an umbilical cord, so it is unknown if Lisa's husband is dead and, if he is, what he used to kill himself with.

After the murders and possibly suicide, the player wanders through the now haunted house, where the radio explains the husband's murders while the player is haunted by the vengeful ghost of Lisa and the dark form of the Baby, a twisted underdeveloped fetus. Messages are found on some of the walls, presumably related to Lisa's husband, such as "I can hear them calling to me from Hell" and "No turning back now". The most interesting message is one apologizing to Lisa and claiming that there is a monster inside of him, perhaps hinting at his possession or alternate personality, making him feel remorseful and guilty.

Lisa' husband appears only in photographs around the house as a clean-shaven young white male with short brown or black hair. Another photo shows him with a large mustache, and another shows him with no mustache and thick sideburns.

Little is known about his personality, except that he was obviously mentally unwell and violent during his killings. However, according to his messages, he was extremely remorseful about his actions.

From the ending speech, the speaker (presumably the Baby or one of the other children) says that "Dad was such a drag. Every day he'd eat the same kind of food, dress the same, sit in front of the same kind of game", showing that he was a normal and lived a routine life prior to his killings. From the speech, it is obvious that the speaker was caught off guard when he snapped, further hinting that nothing was wrong previously. 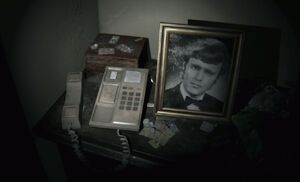 Lisa's husband's photo on a desk. 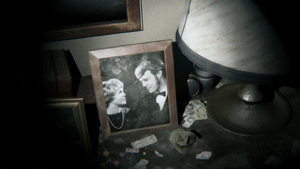 Lisa with her husband in another photo. 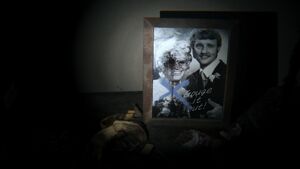 Lisa (with her eye missing) in a photo with her husband with the words "Gauge it out!" written at the bottom. 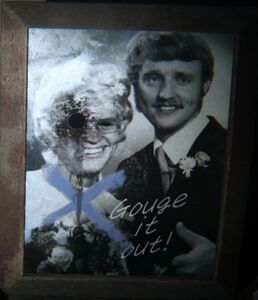 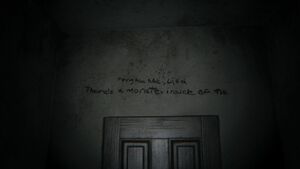 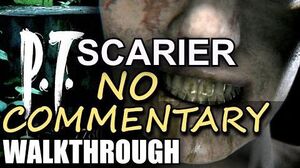