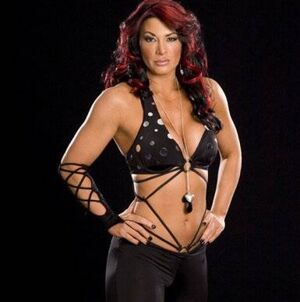 Lisa Marie Varon is a female professional wrestler who has competed for WWE as Victoria and for TNA as Tara. In her combined career as a Diva and a Knockout, Varon has worked as both a face and a heel, but she is known primarily for her stints as a villainess. Combined, Varon has had four different stints as a villainess; two in WWE and two in TNA.

As Victoria, she started out as a psychotic villainess who wanted revenge on Trish Stratus, who (in her mind) betrayed her back when they were fitness models together by leaving her to join WWE. Her first heel role led to her first Women's Championship victory over Trish. Victoria's second run as a villainess began in 2005 after she attacked all of the participants of a bikini contest, which was won by Christy Hemme. After the attack, the evil Victoria explained her actions by expressing jealousy of Christy's popularity, which led to a short feud that ended with Victoria defeating Christy at Vengeance. Months later, Victoria aligned with fellow villains Torrie Wilson and Candice Michelle as they tormented Ashley Massaro, as well as Trish Stratus and Mickie James. Victoria's second heel role lasted until she left WWE in January 2009.

Varon joined TNA as Tara in May 2009 as a face, but she would turn into a villainous Knockout in 2010 when she attacked her tag team partner, Angelina Love, after they lost to Madison Rayne and Velvet Sky in a tag team bout for the Knockouts singles and tag team championships. Tara would later align with Madison Rayne as the two continuously battled against Mickie James for several months. That heel stint came to an end when Tara was freed from Rayne's control due to James defeating her in May 2011. Despite her babyface run at the time, Tara portrayed a villainous opponent for Gut Check contest Taeler Hendrix. After defeating her, Tara went back to her babyface role and hugged Taeler in a show of respect.

Tara would become a villainess again four days after she was unsuccessful in defeating her protégé, Brooke Tessmacher, for the Knockouts Championship at No Surrender; doing so by attacking Brooke in the ring. After the heel turn, the evil Tara nearly attacked Christy Hemme when she refused to say that she (Tara) was her favorite Knockout. Tara won the Knockouts Championship from Brooke at Bound For Glory, and she revealed her "Hollywood Boyfriend" as Jesse Godderz that same night. Tara's last stint as a villainess ended when she left TNA in mid-2013.

In 2016, Lisa Marie debuted for Bellatrix Female Warriors under her real name, doing so as the special guest referee in the main event Bellatrix World Championship contest between champion Sammi Baynz and challenger Destiny. Lisa Marie turned heel during the match when she attacked Baynz and attempted to help Destiny win, only to be thwarted by Saraya Knight. On the following event, Lisa Marie teamed with Destiny against Saraya Knight and Sammi Baynz for the latter's Bellatrix World Championship, but the match ended in a no contest. Lisa Marie began feuding with Saraya later in the year, defeating Saraya in a singles match, only for both rematches to end in a no contest.

In July 2017, Varon made appearances for Ultimate Championship Wrestling in Nova Scotia, Canada; competing as the villainous Victoria in a series of matches against up-and-comer Maddison Miles. Victoria won their first two encounters on the 19th and 20th, and also picked up a mixed tag team victory, before losing to Miles on the 22nd. On December 2, Varon appeared at House of Hardcore 36 and competed against her former Vince's Devils cohort Candice Michelle, in what was Candice's retirement match. Varon later attacked Candice after feigning an injury, establishing herself as the villainess in their match, and following her heel turn, the evil Varon ended up defeated by Candice. 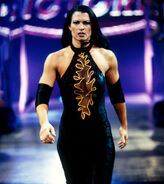 RAW 12 September 2005: Torrie holds Trish for Victoria to attack, but she ends up missing, and hits evil Torrie instead 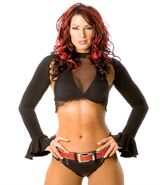 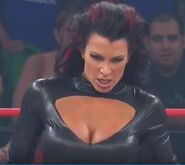 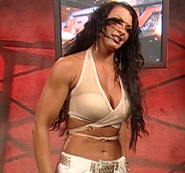 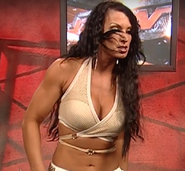 Add a photo to this gallery
Retrieved from "https://villains.fandom.com/wiki/Lisa_Marie_Varon?oldid=3703564"
Community content is available under CC-BY-SA unless otherwise noted.