To remain in the popular crowd

Lisa Silver is an extremely popular cheerleader at Pearl Bailey High School in and is one of Steve Smith's classmates the TBS animated series American Dad!. In the pilot episode, she and Steve briefly dated although Lisa wouldn't even kiss Steve as he is "repulsive". She is one of the main antagonists in the Season 4 episode "Escape From Pearl Bailey".

She is voiced by Carmen Electra in the pilot episode and Elizabeth Banks starting with the episode "1600 Candles".

Role in "Escape From Pearl Bailey"

Lisa Silver is running for Student Council President, though she is clearly corrupt. Steve tries to persuade Debbie to run against her, which she accepts after learning that Lisa spent the school's money for fetal pigs on hiring a Hollywood hairdresser and a live buffalo. Steve works extremely hard to get support, neglecting his friends. Though Debbie seems to be winning, someone posts a slam page and she loses.

Steve determines that it was Lisa and her friends and executes an elaborate revenge scheme financed by pawning Toshi's family katana. Using a mask, Steve exacts his revenge on the cool girls in a parody of Navajo Joe. On Amy, he has a buffalo excrete on her, with laxative; Janet, having her left leg filled with fat during her liposuction; and last Lisa, infecting her with oral herpes by giving her teddy bear to a prostitute and then letting her smother the bear in her sleep. However, Debbie is horrified that Steve went against her wishes and dumps him. Steve later learns that his friends were the ones who posted the slam page due to their jealousy of Debbie and set Lisa Silver and her friends up (to avoid being discovered & knowing that Steve would go against Debbie's wishes and go after them), because he was spending a lot of time with Debbie that they wanted him back with their posse and if she had won the election he would be so busy being Vice President they feared they wouldn’t see much of him anymore. This backfires on the trio however as Steve chastises them severely for causing him to hurt Lisa Silver and her friends for no good reason, losing Debbie and jamming laxatives arm deep into the school mascot, telling them that their friendship is over and Steve attacks Snot for insulting Debbie, but before he could attack him he looks up and is shocked to see an infuriated Lisa Silver & her angry friends along with the rest of the angry jocks and angry cheerleaders (whom they’ve rounded up to form an angry mob) after finding out that he was responsible (even though Steve nervously tried to deny it), after tracing his purchase of the mask (since their friend's uncle owns the mask store and according to his receipts only one person bought a Hopi Indian revenge mask in the last 50 years) plan to pulverize Steve and his friends for what they did to them (with Principal Lewis' say so since one of her friends is his daughter).

As Steve and his friends try to escape from the school, Principal Lewis abuses his power and makes an announcement to the various cliques in the school to catch them, offering a $500 dollar reward. They get past some of the cliques, but when they stumble into Goth territory, Debbie tells her friends to let Steve go, understanding why he did what he did. But her Goth friends were going to turn Steve's friends to the popular people, so Steve decide to go with them but Debbie decides to let them all go. They distract the other cliques by dancing in their way. They make it outside, but the cool kids cut them off from Francine and they get cornered in the school bus. They leap out of the bus to go out in a blaze of glory; as the screen freeze-frames, we hear Steve shouting "We're not taking any of them with us!" along with the sound of several punches landing at once. 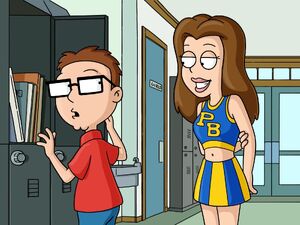 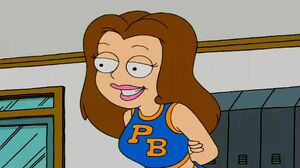 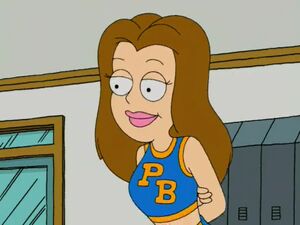 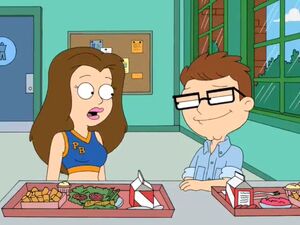 Steve asks Lisa to the dance in 1600 Candles 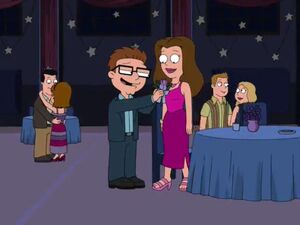 Lisa at the school dance with Steve 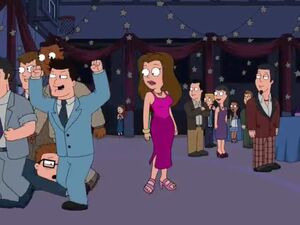 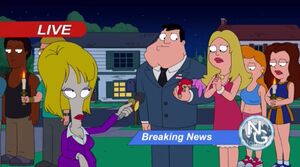 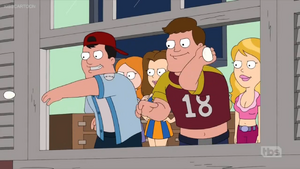 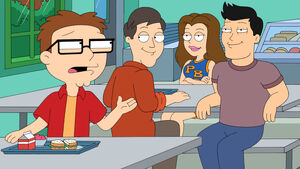 Lisa & Vince Chung tease Steve and his friends about having sleepovers 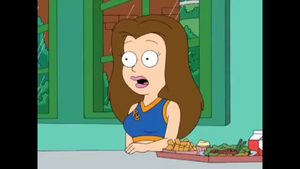 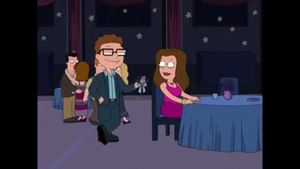 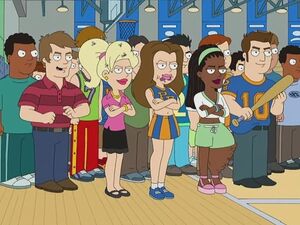 Lisa Silver and the rest of the mobs evil stares along with Amy, Janet Lewis & the 2 jocks evil grins 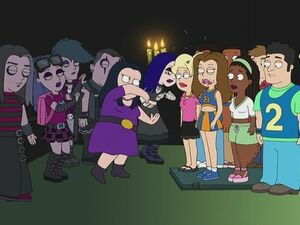 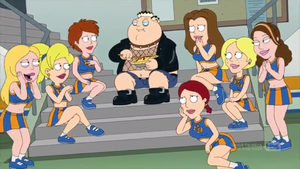 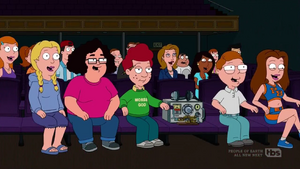 Retrieved from "https://villains.fandom.com/wiki/Lisa_Silver?oldid=3943013"
Community content is available under CC-BY-SA unless otherwise noted.