Leader of the Frostguard

Unite the Freljord against the primal gods (formerly).

Gain power for the Frostguard.
Keep the Watchers frozen.

Lissandra, also known as The Ice Witch, is a villainous playable character in the multiplayer online battle arena game League of Legends. The leader of the ancient and secretive Frostguard, Lissandra uses her dark ice magic to use the power of the True Ice to her advantage, keeping her true intentions a secret to everyone but herself.

The 113th champion added to the game, Lissandra was released on April 30, 2013, and is most commonly played in the mid lane.

She is voiced by Tess Masters.

Long ago in the ancient Freljord, three sisters sought to unite and bring peace to their homeland, as the actions of old magical creatures ravaged the mortal realm. Seeking to meddle with these magical powers, each of the sisters paid a terrible price, with Serylda losing her voice to the Aspect of Twilight, Avarosa losing her hearing to the Void, and Lissandra losing her sight to the claws of the Volibear. Realizing they would have to work together to make any sort of progress, Lissandra and her sisters united on the battle, which made them nearly unstoppable. However, curiosity led the now blind Lissandra to instead explore the world of dreams, and the discovery she would make would severely threaten the alliance with her sisters.

Lissandra had a vision of the Void and the coming of the Watchers, a race of cataclysmic beings that would surely destroy their world and everything she and her sisters had fought for. To prevent this, Lissandra made a pact with the Watchers kept secret from even her own sisters, stating that in exchange for great power and near-immortality, she would prepare Runeterra for the coming of the Void.

With the Void's power on her side, the three sisters and their closest followers became the Iceborn, and would have the ability to survive even the harshest cold of the Freljord. However, Serylda and Avarosa were displeased with what Lissandra had done, believing she was meddling with forces beyond her control. Lissandra tried to appeal to the Watchers for more time, but the Void didn't answer her requests, beginning their invasion in the far north to bring about the end of Runeterra.

With Lissandra's betrayal revealed to the world, she froze everyone in the area in a barrier of True Ice, including her sisters, her allies, and the Watchers themselves in an impenetrable prison. Lissandra hoped that her elemental magic would be enough to contain the Void's power, but she soon realized that it was not enough, as the glacial prison was slowly being corrupted from the inside. The prison of the Frozen Watchers was just a delay of the inevitable; Lissandra would have to watch over the prison for centuries to prevent another disaster.

Hoping to contain the damage, Lissandra gathered her remaining followers to honor herself and her fallen sisters, pledging to gather more True Ice and people descended from Iceborn to join their cause. Together, they formed the Frostguard, and they sought to rewrite history to hide Lissandra's betrayal from future generations. However, with the emergence of the successors of Avarosa and Serylda, the idealist Ashe and conqueror Sejuani, Lissandra realizes that her attempt to end her sisters' legacy has failed, and now seeks to lock away her secrets by pitting their two factions against one another.

In game, Lissandra is a burst-type champion, using her powerful ice spells to barrage single targets from a distance. Her passive, Iceborn Subjugation, lets her briefly reanimate killed enemy champions as Frozen Thralls to attack other enemies. Lissandra can throw and Ice Shard that shatters and deals damage to pass through and slow enemies, Ring of Frost to briefly encase enemies in ice, and Glacial Path to create an ice claw that passes through the ground before teleporting her to a location. Lissandra's ultimate, Frozen Tomb, can freeze an enemy champion and deal damage and slow in a radius, or encase Lissandra herself instead, which protects and heals her.

A manipulative being from an ancient era, Lissandra is a cunning opportunist who uses patience and magical prowess to get what she wants. When she was approached by the exiled Trundle, Lissandra was able to cleverly manipulate the frost-troll by granting him the power to take over his tribe and declare himself king of all trolls, a crafty maneuver that granted her a powerful alliance. Viewing her actions as a necessary evil, Lissandra betrayed not only her own sisters to the Watchers but also the Watchers themselves, as she did not subscribe to their goals for the destruction of Runeterra.

Because of her traitorous behavior, few from the Avarosans or Winter's Claw believe they can trust Lissandra, and thus she lives a lonely existence save for her closest acolytes. In her mission of keeping the Watchers contained, Lissandra has also developed an unhealthy obsession with ice, seeking to cover as much of her territory as possible to keep them contained, and seeking more power for herself to be able to defeat them alone. However, Lissandra also realizes that time is running out and has accepted the fate of the world if the Frozen Watchers do successfully escape.

Lissandra as she appears in Legends of Runeterra.

Lissandra in "The Dream Thief".

Lissandra in "Legend of the Frozen Watchers". 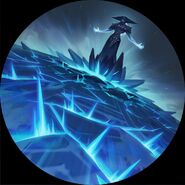 Lissandra in "Enter the Freljord".