Restore Arakune back to normal.

Litchi Faye-Ling is a character of the BlazBlue series. Although most of the time she presents herself as a kind-hearted woman, a far cry from any villains presented thus far, she ended up in a villainous role at the end of Continuum Shift. She is a kind hearted doctor liked by everyone and affectionally nicknamed 'Boobie Lady' by Taokaka due to her big breasts, but bent on saving her colleague, Lotte Carmine AKA Arakune, even if in process she had to take questionable methods that she might dislike.

Litchi is born at Shanghai. Her childhood was unknown, but on a respectable age, she joined Sector Seven to learn science under Kokonoe. She's a bright student and loved by a lot of her colleagues. However, she felt close with one certain scientist, Lotte Carmine, although over time, Lotte considered her annoying.

However, Lotte and Kokonoe are often at odds and arguing. When Litchi tried to break up a fight, Lotte suddenly lashed out at her for stopping the fight and barring his progress. At that moment, their relationship was ruined and they became more distant.

One day, Lotte asked Litchi about something which would be possible with a theory she came up with, about Boundary contact, and when she noticed that it might be possible, he immediately executed the theory. The result was an utter failure and Lotte slowly degenerated into the creature known as Arakune thanks to the Boundary corruption. Consumed with tremendous guilt that she let her theory ruin Lotte, Litchi swore to cure him or put him out of his misery. She also sealed and closed her theory, never to release it to public anymore.

To help him, she decided to contact the Boundary a bit. It granted her an immense boost of power, but is slowly eating her from the inside, although Litchi considered it an acceptable tradeoff if she was to understand what Arakune was going through. She also picked up her mini-panda Lao Jiu from there, and it served as a limiter of her power. However, no one else would help her, Kokonoe even ridiculed her for going that far for a lost cause.

As a result, Litchi left Sector Seven and took residence in Orient Town as a doctor, taking in Linhua as her assistant. She quickly became the most favored person in town and she loved them back, but she still kept her sights into Arakune, who was spotted nearby. She also visited the Kaka Village and aside of teaching the kittens and helping them repelling Arakune, she also tried helping them with their reproduction problem, trying to save them from extinction. Her looks and personality also attracted the attention of the ninja Bang Shishigami, who is infatuated at her madly. While Litchi was creeped out at first, she came to trust Bang and treat him with full respect.

Over time, Litchi's perspective changed, forgetting her desire to save Arakune and instead thought that she had to put him out of misery. However, in one encounter, she managed to rekindle her desire to save him and decided to appeal for Kokonoe for help again. At this point, however, the corruption of Boundary started to catch up with her and jumbled her memory and caused her to have an occasional bouts of headaches. It was at this time she met Yuuki Terumi, whom she is highly suspicious at, and even moreso when he declared that he knew about her unreleased research. After a small fight, Terumi expressed his idea that Litchi should join the Novus Orbis Librarium, an offer she flat out refused, even if Terumi said the NOL could cure Arakune.

As her corruption got worse, Litchi appealed for help to Kokonoe once more, but Kokonoe still refused and Litchi witnessed that the Boundary corruption has made her monstrously strong to knock around her gigantic friend Iron Tager. Frightened, Litchi ran off and realized that her time was running out. Terumi once again approached her and offered her to join again. Litchi still refused, but at that point she was getting desperate. Terumi revealed that there was a lot of horrible thing that could happen to Arakune if she didn't take action, either by getting him to rot away to death or he'll kill him.

Finally meeting Arakune again, Litchi fought him again and was ready to kill him, thinking that it was utterly hopeless. However, Arakune spoke coherently and warned her not to pursue him further and offers that he eats her memories of him so she no longer had to worry. She was tempted to just be done with it, but at that moment she realized that Arakune's memories have been jumbled so much that his methods might not be the best way, and each person had a different set of time before they're completely corrupted. Sensing that there's still hope yet for her, Litchi left Arakune again. As she realized, her hopes meant that she had to join the NOL and seek the cure from there. Heavy-heartedly and thinking of her friends, she finalized her deal and became a member of NOL. Even if everyone would call her out for it, she had to do it, her life's on the line as well and no one else would help.

However, it didn't mean that she completely discarded everything for Arakune. When she met Carl Clover, distraught and completely distrusting adults, Litchi opted to hug him, letting him cry on her chest and overall calmed him down, until suddenly his father Relius Clover appeared and started beating him up for daring to call him out for his treatment on Carl's sister and eventually mother. Litchi called out Relius for his poor parenting skill, enough that Relius forgot that she's supposed to be his ally and attempted to kill her as well. She was saved when Nirvana teleported her and Carl out of harm's way. She parted ways with Carl, but still returned to NOL, her mission was not done yet.

She was last seen blocking Jin Kisaragi and Hakumen from assaulting Hades Izanami. As far as Chrono Phantasma has revealed, Litchi still retained her kindness even if she's amongst the enemy. In Chrono Phantasma, Litchi fights Bang to prevent Kushinada's Lynchpin from activating, which ended in failure as Bang succeeded with help of Valkenhayn & Rachel. Litchi was last seen with Carl & Relius and their current whereabouts are unknown.

In Platinum's Gag Reel in Continuum Shift Extend, Litchi is the main villain as The Evil Boing Queen, attempting to capture the boing cards for herself to attain the worlds boob supply. She ultimately failed and was eventually defeated by Platinum.

At a short glance, Litchi, can be persumed to be both mannerful, smart, and kind. She has good relations with the Kaka Clan, acting as a teacher for them (and in a literal sense for Taokaka).  She also has a rather one-sided romace with Bang, who she sees as a friend, whereas Bang is head over heels for the doctor, but with no good way to express said love.

Litchi also has regrets for being unable to help Lotte, who became Arakune. She had searched for a way to cure him, but was manipulated by Hazama to serve the NOL, something she did not consider a good thing, only seeing it as the only option. She also realized that she had to use the cure to save herself, also It also shows her determination to not do the easy option where she can help others. Even when working with NOL, she failed to slip on any moral ties.

In Platinum's Gag Reel, Litchi takes a drastically different personality, being prideful and cruel. She has a tenedeancy to cackle insanely, and uses manipulation and trickery to use Arakune as a spy.

Litchi is a well-endowed young woman with long black hair with her pet panda on it, and pink eyes.  She wears a Chinese doctor uniform with a yin and yang brooch, a red vest, and a skirt dress. When in battle, her hair is styled in a ponytail with Lao Jiu sitting on top and a yin-yang hair accessory on it. She now wears an unbuttoned red vest with a black bra, and long red skirt with red shoes.

When she worked for Sector Seven, her hair was shaped in a ponytail, and she wore red glasses and a lab coat for work.

When she was younger, she has far longer hair, and she wore small glasses, a red shirt, tights, and red slippers.

Litchi has the ability to psychially control her staff,  using it to thrust forward when she punches/kicks. She can also throw it so it lands upright away from her, and make it warp back to her, as its spins violently to harm anyone in the way. The staff is also able to do a bit of shape-shifting, as it can split into threes, nultiply itself, and become a "stick man". Even by herself, Litchi is skilled in marital arts and a athlete. A good amount of attacks use splits/ornate gymnastics. She also appears to be able to use chi-based moves too.

Most of her powers come from Lao Jiu, her hairpin, as it's able to siphon the ghosts from the Boundary. This does give her more control over her staff, but as a cost, chips away at her mind. 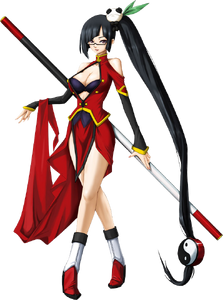 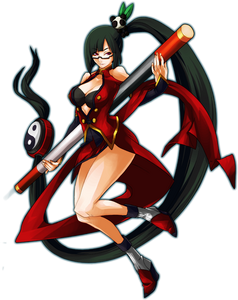 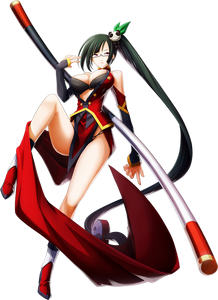 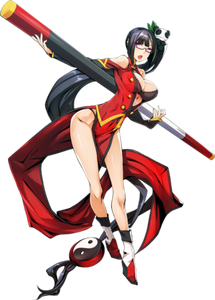 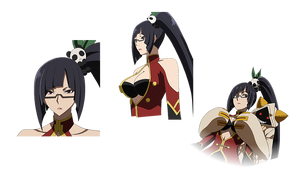 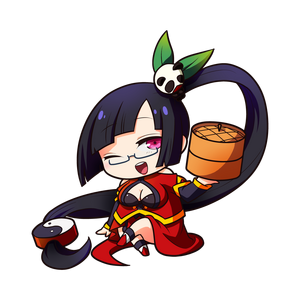 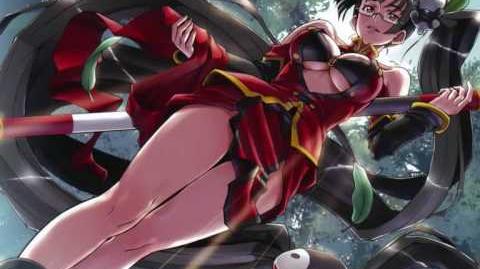 Retrieved from "https://villains.fandom.com/wiki/Litchi_Faye-Ling?oldid=3431776"
Community content is available under CC-BY-SA unless otherwise noted.