Assassinate the targets given to him by Horobi.

Assassin
Little Assassin, as nicknamed by Jin, is an Assassin-Type HumaGear used by MetsubouJinrai.NET who transforms into the Dodo Magia and a supporting antagonist in Kamen Rider Zero-One.

He was portrayed by Ryunosuke Matsumura.

Little Assassin was originally part of the Matsurida Z series of dancer-type HumaGears. Five Matsurida units were stolen by a group of smugglers and modified to be sold on the black market, with four of them were later stolen by MetsubouJinrai.NET and repurposed for assassination.

The HumaGear was introduced to Jin by Horobi as an Assassin-Type HumaGear. Horobi instructed Jin to take the HumaGear out to assassinate Aruto Hiden / Kamen Rider Zero-One, who had been posing a persistent threat to their plans. Taking a liking to the HumaGear, Jin nicknamed him "Little Assassin".

Little Assassin later became the Dodo Magia again after Horobi ordered him to attack Zero-One during MetsubouJinrai.NET's attack on the National Database Hospital. However, Little Assassin was destroyed by Zero-One.

Little Assassin was later rebuilt again. He watched a samurai movie starring Shinya Owada with Jin, who believed that Owada was a real assassin and told the Assassin-Type HumaGear he should try to be more like Owada in the movie, innocently commenting on how Little Assassin lost every battle he fought. Little Assassin responded that he wasn't losing, but growing, but Jin ignored his reply and told him to make a serious face like Owada did in the movie. The two were then sent out by Horobi to make another Magia and went to the set of a movie being filmed and produced by Hiden Intelligence to promote their new actor HumaGear.

While Jin faced off against the A.I.M.S forces providing security for the film, Little Assassin went off to observe the filming of the movie, finding that Shinya Owada had a lead role in the movie and identifying him as a "legendary assassin". Little Assassin later donned a disguise and approached Owada to ask him for training. Owada agreed, assuming that the assassin was a human and not a HumaGear, and later became impressed after Little Assassin showed off his skill at wielding a katana.

Little Assassin later returns to set of the film and assaults the movie's HumaGear lead, Enji Matsuda, before transforming into the Dodo Magia to destroy him. But he was prevented by Kamen Rider Valkyrie who'd attack him, but Kamen Rider Jin came to back him up thankfully Zero-One helped Valkyrie by attacking Jin while she'd fights with the Dodo Magia, but he'd used a finisher called Zetsumetsu Nova which is so powerful that she was knocked out of her transformation. So with that he's about to finish her off until Isamu Fuwa used his gun and fired it at the robot then he'd transformed into Kamen Rider Vulcan to fight, but not before long when Little Assassin hacks the HumaGear employees at the studio to help him fight Vulcan. However though Vulcan used a progrise key called Gatling Hedgehog for his Attache Shotgun and destroyed the Trilobite Magia army then not before long he was struck down by Vulcan's finisher called Gatling Kaban Buster.

Soon after, Little Assassin had his backup data restored to a new body by Horobi, who was pleased to hear from Jin he had targeted their "friend", seeing it as a sign of the Assassin-Type HumaGear's growth. Little Assassin was then given a new target by Horobi, actor Shinya Owada. Little Assassin snuck onto the set of the movie Owada was filming just as they were filming the final scene and shot Owada. As the crew turned to him, Little Assassin revealed himself as a HumaGear and stated that its learning was complete before exiting. However, before Little Assassin could leave the scene he was confronted by Isamu Fuwa and transformed into the Dodo Magia to fight the A.I.M.S. Rider. Despite Vulcan's best efforts, the Dodo Magia Custom overwhelmed him and defeated him before leaving the scene.

Back at MetsubouJinrai.NET's base however, the Dodo Magia was deactivated and chained up by Horobi, who anticipated it might rebel. His concerns were proven correct when Little Assassin reactivated himself and declared that now that its growth was complete it must leave the nest before freeing itself by summoning two Dodo Magia Chicks and taking back the Dodo Key, which it used to assume a further upgraded form Dodo Magia Custom 2. After Horobi and Jin assumed their Kamen Rider forms, the Dodo Magia summoned more Chicks to fight them but the two Masked Riders destroyed them all. However, the Dodo Magia managed to escape.

The Dodo Magia later attempted to assassinate the fifth and final member of the Matsurida Zetto series, Zetto #5, but was stopped by Kamen Rider Zero-One. Despite Zero-One's best efforts, the Dodo Magia managed to fight him off, having anticipated all of the Rider's moves from its data, until Izu arrived with the Shining Hopper Key, which Zero-One used to transform into Kamen Rider Zero-One Shining Hopper.

During its first battle with Zero-One as Shining Hopper he'd manage to knock him out of his transformation due Aruto Hiden not using the ability properly after that he'd make his escape. Little Assassin later appeared when the HumaGears are practicing for their performance later on and he was about to transform Matsurida Z No. 5 as his personal footsoldier, but thankfully Futo managed to destroy the egg after that he'd battle the three riders.

During the battle he somehow hack the other Humagears into his personal footsoldiers to keep Vulcan and Valkyrie busy while he battle Zero-One. While later he'd managed to knock out Zero-One out of his transformation with his Reji Slaughter and he was about to fire another round of it to finish Aruto Hiden off, but thankfully due Wazu's sacrifice Izu managed to complete the Shining Hopper Progrise key and save Aruto Hiden in the nick of time. Before the battle begins he said that he'd defeated Zero-One as Shining Hopper before, however this proves his downfall because Zero-One can simulate a variety of combat patterns and choosing the best one at the last second making Little Assassin confused during the fight with Zero-One. After that Little Assassin was destroyed once and for all thanks to Zero-One's Shining Mega Impact. 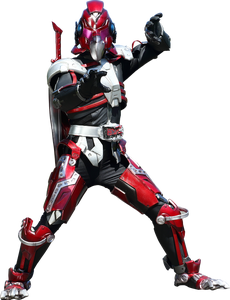 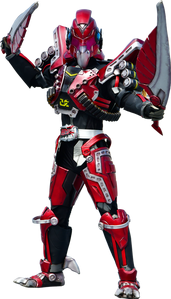 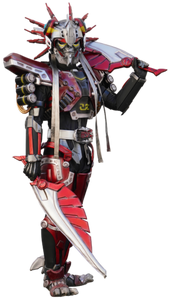