Top Sherriff of the Town of Big Whiskey

Beating, torturing and killing those he dislikes.

Kill anyone who dares to oppose or stand in his path (all failed).

He is the cruel, manipulative and brutal sheriff of the town of Big Whiskey, which he rules over with an iron fist. He lets the two cowboys that scarred the prostitute go free, and Munny, Logan and the Schofield kid seek out them to claim the bounty for them.

He was portrayed by Gene Hackman who also portrayed Lex Luthor in Superman and General Mandible in Antz.

In 1881 in Big Whiskey, Wyoming, two cowboys—Quick Mike and "Davey-Boy" Bunting—attack and disfigure prostitute Delilah Fitzgerald with a knife after she laughs at Quick Mike's small penis. As punishment, local sheriff "Little Bill" Daggett orders the cowboys to bring several horses as compensation for the brothel owner, Skinny Dubois. The rest of the prostitutes are outraged by the sheriff's decision, and offer a $1,000 reward to anyone who kills the cowboys.

Little Bill, whilst ruling the town, is building a house allowing him to watch the sunset. William Munny, Ned Logan and the Schofield Kid are hunting down the two men in order to obtain the reward.

"English Bob", an old acquaintance and rival of Little Bill, is also seeking the reward. He arrives in Big Whiskey with biographer W. W. Beauchamp, who naively believes Bob's tales of his exploits. Enforcing the town's anti-gun law, Little Bill and his deputies disarm Bob and Bill beats him savagely, hoping to discourage other would-be assassins from attempting to claim the bounty. Bill ejects Bob from town the next morning, but Beauchamp decides to stay and write about Bill, who debunks many of the romantic notions Beauchamp has about the wild west.

William Munny, Ned Logan and the Schofield Kid then kill the two men. After hearing about the murders of both criminal men, he vows to exact revenge on William and his gang. He captures Ned and brutally whips him to answer where William is. Ned refused to tell him and as such, was killed. Ned's body was put in an open coffin on show by Little Bill. A sign was put across Ned that read 'this is what happens to assassins in our town'.

After hearing of Ned's murder at the hands of Little Bill, Munny confronts the sheriff and his men in the saloon as he is gathering a posy. As Sheriff Little Bill was laying out his plans for capturing William and the rest of his gang, William cocked his rifle to let everyone know he was there. First, William demanded to speak to whoever owned the place. Then, an unarmed Greely came forward with his hands up. Despite protests from Little Bill, William pulls the trigger on Greely and then mockingly exclaims "he should've armed himself, especially if he was going to use his establishment to put my friend on display."

Then, after aiming the rifle at Little Bill, the Sheriff proudly proclaims 'once this coward shoots me, take him out.' The rifle misfires and then a gunfight ensues.

Following a gunfight which left several of his deputies dead, Little Bill is wounded but still attempts to kill Munny with a concealed pistol. Munny catches him and aims a rifle at his head. First Bill begs saying "I don't deserve this," William replies "we all deserve it. You know you had this coming to you." As Little Bill curses him exclaiming "I will see you in hell," Munny fires one final shot to finish him off thus ending his reign of terror. As William rides off, he tells the town 'bury him right or I will come back!' As no guns were allowed in the town and the Sheriff was no longer around to 'protect' they likely obliged.

Little Bill is a ruthless sheriff who uses any means necessary to keep crime away from his town, Big Whiskey. He is abusive towards the prostitutes in his town and is particularly brutal with his enemies, as shown when he severely beats English Bob.

The Sheriff is shown to be a corrupt official since he refused to grant justice to the harlots. He is also very abusive and cowardly with his enforcement of the town's anti Second Amendment policies, such as how he brutally beat Munny for being armed while having several men training guns on him. He is also shown to be very arrogant as he talks very much to the reporter and cruel as he was ready to shoot a severely injured English Bob had he grabbed a weapon.

Little Bill also vows to kill anybody who collects the bounty of the men who attacked one of the prostitutes. This shows he is very sexist as he refused to punish the men who scarred her. This is an example of selective enforcement of the law. Although it is implied he never meant to kill Ned, he still celebrates by putting his body on display in a casket, in a standing position outside the town bar. 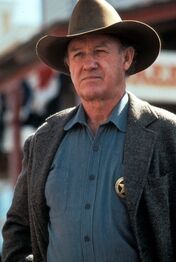 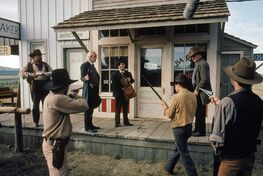 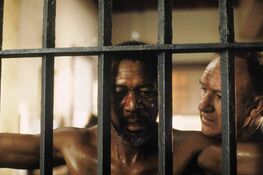 Little Bill's death.
Add a photo to this gallery

Retrieved from "https://villains.fandom.com/wiki/Little_Bill_Daggett?oldid=3382455"
Community content is available under CC-BY-SA unless otherwise noted.