The Little Demon, as Soul refers to him, begins residing within Soul's mind when Ragnarok cuts him and taints him with black blood. He often appears when Maka and Soul are on the losing end of a battle, trying to get Soul to give in to the power the black blood gives him.

The Little Demon first appears in Soul's dreams after his first confrontation with Crona, tempting him to give in to the black blood. He finally gives consent during his second battle with Crona, but before the madness produced by the black blood consumes Soul, Maka reaches Crona's wavelength and offers to be her friend, sparing both her and her weapon from the madness.

He didn't make another major appearance until the battle for Brew, where Maka and her squad faced off against Mosquito. In this case, Soul played the piano to accomplish Soul Resonance. Mosquito was easily overwhelmed, but Soul once again gave into madness, managing to cut off the power. In the anime, Maka successfully uses Genie Hunter, defeating Mosquito and forcing him to retreat with Brew.

In the manga-exclusive final battle against Arachne, the demon calls upon Soul to give in in order to defeat the witch. Arachne's spider webs in her castle were spreading madness, and Soul took advantage of this, using soul resonance without the demon's aid.

He appears one final time in the battle against Asura, and this time manages to take over Soul's body, rendering him unconscious on the outside. Maka enters Soul's head to rescue him, and is greeted by the demon, who had taken on Soul's form. As he shuts the door behind them, which later disappears, "Soul" explains that there is no way out, handing her a box and with what he says is his "courage" trapped inside. The real Soul is trapped inside the box, and protests that Maka should not open it. She eventually realizes that the Soul standing before her is not the real one. When the demon reveals his true form, he gives her a choice of killing the demon along with Soul, or watching her partner be consumed by madness. She opens the box despite Soul's protest, and manages to reach Soul before the demon does. His size diminished considerably, Soul accepts that the demon is a part of him that cannot be destroyed, and so he repays him by swallowing him whole. 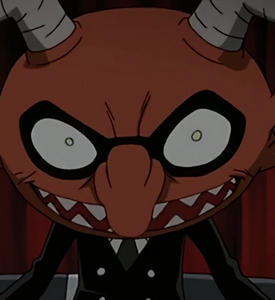 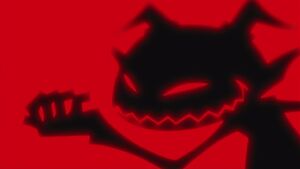 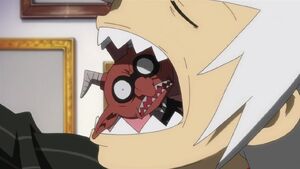 The Little Demon's defeat and presumed death.
Add a photo to this gallery
Retrieved from "https://villains.fandom.com/wiki/Little_Demon?oldid=3454141"
Community content is available under CC-BY-SA unless otherwise noted.