She is played by Jennifer Banko.

She is the daughter/sister of Leatherface, the sister/niece of Alfredo Sawyer, Tex Sawyer and Tinker Sawyer, the grand-daughter of Mama Sawyer and the great-granddaughter of Grandpa Sawyer. Little Girl meets Michelle after she encounters the house where Little Girl lives. When Michelle meets her, the Little Girl guides her to her room in which she’s revealed to be a Sawyer as she stabs her in the leg which a hidden blade with the room turning out to be a trap as Tex then ambushes Michelle and apprehends her. Later, when Michelle wakes up with her hands nailed to a chair as the Sawyers prepared to cannibalize her and Ryan who is hanging upside down unconscious. As the Sawyers interact with each other, Tinker reveals a mechanism to allow the Little Girl to kill Ryan as her first ever kill. With glee, the Little Girl pulls the trigger mechanism, sending a sledgehammer down into Ryan’s face right as he was regaining consciousness, killing him instantly. The Little Girl then uses a cup to collect Ryan’s blood and then she precedes to feed Ryan’s blood into the corpse of Grandpa, all as Michelle watches in terror. Minutes later, Leatherface prepared to kill Michelle with his new chainsaw as Benny stumbled across a window and notices it. Benny then uses the gun he was carrying and blindly fires it into the house killing Mama Sawyer and Tinker which allows Michelle to escape after stabbing Tex in his back after he tried to grab her. 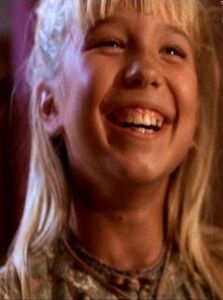 Retrieved from "https://villains.fandom.com/wiki/Little_Girl_Sawyer?oldid=4269506"
Community content is available under CC-BY-SA unless otherwise noted.