Little Hans is the protagonist of the infamous 1943 Disney short Education for Death.

He was voiced by Stephen Muller uncredited.

In the alternate version of Nazi Germany, Hans' parents appeared in the courthouse asking the judge if they are the pure blood of Aryan and named their child "Hans", which the judge agrees. Into the service of the Fuhrer and the Nazi party, the judge hands them the Mein Kampf book and their passport containing the space for the future children.

Years later, Hans hears the disoriented version of the Sleeping Beauty which features the witch as Democracy, the princess representing Germany, and Adolf Hitler as the knight. Thanks to its disoriented tone of the story, Hans was fascinated with the fuhrer as he and the rest of the students were seen saluting to the portrait of Hitler wearing the knight armor.

Soon, Hans became sick and bedridden as his mother prays for him, fearing that the party will take him away to the place he'll never be seen nor heard again. Suddenly, an officer bangs the door and is about to take Hans away, but his mother replies that Hans was sick, so the officer tells her to heal her son quickly and warns her if Hans was not better, he will be euthanized.

Being recovered, Hans continued attending the class saluting to the portraits of Hitler, Goring, and Goebbels. Right after the teacher showed the class about the fox (which represents Nazi Germany) eating a rabbit (representing the "weaker" people and nations that the Nazis wanted to conquer or exterminate), Hans feels sorry for the rabbit shocking the teacher and the students, the teacher became furious and forces him to sit in the corner wearing a dunce hat. After hearing his classmates insulting the rabbit as "weak" and "cowardly", Hans stands up and insults the rabbit which satisfied the teacher and the portrait of Hitler, The teacher, then tells the students that the weak must be destroyed.

Hans later attends the book burning crusade, burning any books that were written by Einstein, Spinoza, and Voltaire, and destroying the church. Hans spend the next several years marching and heiling along with the Hitler Youth, until his teens (wearing a uniform similar to the Sturmabteilung) still "marching and heiling" and finally as an adult and a "good nazi" (wearing a Wehrmacht uniform). He "sees no more than the party wants him to see, say or do", So Hans continues marching with millions of soldiers, until they were faded into the row of graves with nothing but their helmets (indicating that Hans was killed) his education is complete, his "education for death". 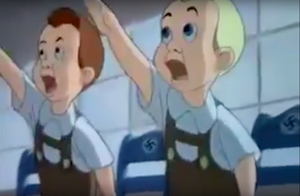 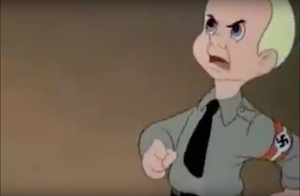 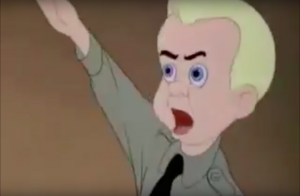 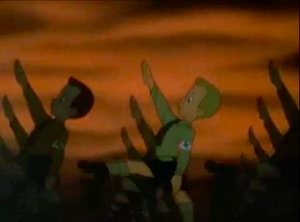 Hans in the Hitler Youth. 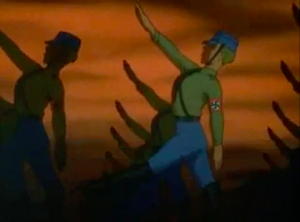 Hans as a teenager. 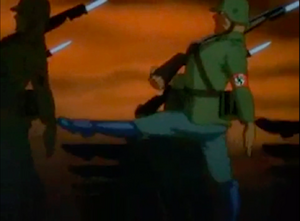 Hans as an adult SS soldier.
Add a photo to this gallery

Retrieved from "https://villains.fandom.com/wiki/Little_Hans?oldid=3890440"
Community content is available under CC-BY-SA unless otherwise noted.