Liver was a minor villain in Akame Ga Kill!. He was one of the members of the Three Beast and also a loyal servant of Esdeath.

He is voiced by Jouji Nakata in the Japanese version and by John Gremillion in the English dub.

Before he join to the The Three Beasts, he was one of the generals of the revolutionary army that fought against the empire before he was falsely accused of cooperating with the empire and was also one of the top of Bulat. During the war against the Empire in the Southlands, he was dismissed from his post due to being framed on false charges when he did not yield to bribe the Prime Minister. He tried to defend himself using his records and merits and that they would never betray his post to join with a corrupt empire, but his proposals fell on deaf ears.

After he failed to defend himself he was left to die in prison for the rest of his life, however Esdeath appeared to free him from prison on condition that he would join her army. She valued his skills and accomplishments, thinking he would be a waste to leave him imprisoned and uses he as a warrior to help in the fight against the revolutionary army. Esdeath also offered sponsorship against the prime minister and his other enemies. He was grateful to her for being saved and given a new life back in the military, became indebted to Esdeath and give his life to serve her to the end. When he and Bulat met again for the first time in many years aboard the cruise ship "Ryussen" with their paths in life have diverged, they fought to the death with their loyalty and ideals in line, Liver committed suicide after he poisoned himself in a last attempt to kill Bulat and shows his loyalty to Esdeath.

Liver's Teigu was a ring called the Black Marlin, which allowed him to manipulate water and other liquids. His skills with the Teigu were so great that he was almost able to destroy Bulat's impregnable Demon Armor Teigu, Incursio. He also possessed adept sword skills. 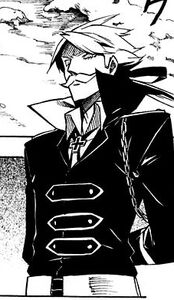 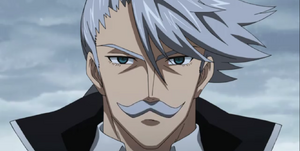 Retrieved from "https://villains.fandom.com/wiki/Liver?oldid=2958914"
Community content is available under CC-BY-SA unless otherwise noted.