It was created by I.C.M (International Computing Machines Corporation) and was exhibited at Peter Parker's high school. It was supposed to be the greatest computing machine ever built. It could answer any question which is fed to it, basing its answer on the vast storehouse of information which it possesses. Unlike a human brain, it never forgets a thing. Two technicians tried to steal it and use it to figure out horse race winners, elections, etc. When Mr. Petty of I.C.M. tries to stop them, one of the technicians bumps the control panel and the robot went on a rampage. Spider-Man was able to stop it by readjusting the Living Brain's controls and deactivating it.

Spider-Man later battled the Brain again, when a nerd sent it on a rampage to nail a bully.

Living Brain later appeared as a member of the Sinister Six when they fought the Superior Spider-Man.[2] Following this, he has it delivered to Horizon Labs, where its reprogrammed to serve as his new lab assistant.

The Living Brain could think and reason faster than any human being and could learn and adapt its behavior. The Living Brain had ball bearing rollers for feet and had pincers for hands. It could spins it's arms and body like a top. 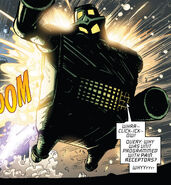 The Living Brain questioning it's design.

Living Brain in Spider-Man 2017.
Add a photo to this gallery

Retrieved from "https://villains.fandom.com/wiki/Living_Brain?oldid=3778044"
Community content is available under CC-BY-SA unless otherwise noted.