Paranormal Minions
The Living Dolls are an antagonistic species in the 2021 horror game Resident Evil Village. They're a group of dolls possessed by a parasitic organism. They work to serve the doll maker known as Donna Beneviento.

The dolls are objects brought to life by a B.O.W. known as "Cadou". The dolls work both as Donna's minions but they are also implied to be her friends. They live in House Beneviento, typically seen standing around in large numbers.

Of all the living dolls, Angie is by far the most physically and mentally capable, being able to walk around at her own free will and to hold full conversations. Angie's only disadvantage is her lack of weaponry, which the other dolls have in the form of metal spider claws.

The Dolls share some similar qualities to spiders. Donna Beneviento is related to an ancient weaver who possesses many spider-like qualities, which may be the reasoning for the Doll's aesthetic.

The dolls appear to be young porcelain dolls that have their designs based on young children. They all wear white and black clothes. When attacking, they can sprout robotic spider appendages and their eyes form blackness around them.

The group of Dolls make their first appearance after Ethan escapes the Baby. Ethan will enter a room filled with them standing around. Donna will appear and tell Ethan that he can't leave, and while Angie flies up onto her arm, a group of Dolls will attack Ethan. After he pushes them off of himself, Angie mocks him and escapes.

For the fight with Angie, the dolls will stand around and flicker. If Ethan takes to long to find Angie, they will attack him, and this time he will have damage inflicted on him. Once Donna and Angie are defeated, they will loose their ability to attack. 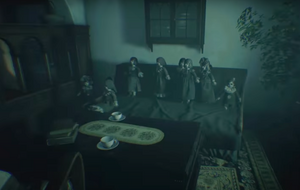 The Dolls standing around in a living room during the search for Angie.

A Doll attacking Ethan for taking too long.