Destroy the Avengers and conquer the world

Hegemonic Energy Being
Living Laser is a character who first appeared in the Marvel Comic Avengers as Arthur Parks, a scientist who created wrist-mounted laser units and a costume. He is often found fighting Iron Man.

Arthur Parks was a research scientist who worked on developing the laser (Light Amplification through Stimulated Emission of Radiation) for use as an offensive weapon. Building the smallest laser capable of use as a weapon yet devised, Parks fitted two of the miniature projectors to his wrists and fashioned himself a costume. Upset by the breakup with his girlfriend, Parks, calling himself the Living Laser, first used his weaponry in an attempt to vent his rage against his ex-girlfriend's fiance. However, he soon became infatuated with the Wasp, and in an attempt to impress her, began to lay waste to portions of New York City. Finding himself in battle with the Avengers, the Living Laser kidnapped the Wasp and fled the country.

The Avengers tracked him down in Costa Verde, a tiny South American nation whose guerrillas the Laser was aiding. The Avengers thwarted his schemes, rescued the Wasp, and extradited him to America. Serving time for his rampage in New York, the Laser freed himself from prison with the aid of the Mandarin. He then began a career as a henchman, working for the Mandarin, Batroc, the Lethal Legion, and others.

After suffering various defeats, the Living Laser spent over a year in his laboratory and devised a way to incorporate laser devices into his own body With the assistance of underworld scientist Jonas Harrow, Parks had an array of miniature laser diodes implanted in various places over his body. Defeated again by the Avengers when he attempted to procure the Serpent Crown, the Living Laser was then contacted by Count Nefaria, who offered to augment his power further. Agreeing, Parks learned too late that Nefaria was using him as a dupe to acquire superhuman power for himself.

Nefaria's treatment activated the energy-gathering diodes in Parks' skin so that he could not shut them down. Desperate, the Living Laser met with East German agents and agreed to help them power their laser-armed satellites in exchange for their siphoning off sufficient energy to save his life. However, months later, he met Iron Man in battle and his energy began to overload. To prevent the satellites from being armed, Iron Man destroyed the siphoning machine. The Laser's power overloaded and he exploded. Although the Living Laser was seemingly killed by the explosion, he continues to exist as a sentient energy being.

Arthur Parks was a person who wanted to make a name for himself, but always fails in trying. He stole a suit that would grant him the ability alter his molecules into pure energy, making him indestructible. He started out by robbing a bank. He was quickly defeated by Iron Man and sent to prison. While he was in prison, the suit he was wearing left particles that turned him into a living laser. He escaped from prison and threatened New York, that he would destroy New York if Iron Man didn't show up. Iron Man showed up and defeated the Living Laser. Parks was send into a different prison where he couldn't escape.

Living Laser appears in Avengers: Earth's Mightiest Heroes and is portrayed by Nolan North. In "The Breakout" Pt. 1, Living Laser is shown as an inmate at the Vault when a mass breakout occurs. He burned through the door to the room of the inmates' confiscated gear and then joined with other Iron Man villains Crimson Dynamo, Blizzard, and the femaleWhiplash to kill their nemesis for good, but they were stopped with help from Hawkeye. He returns in the episode "This Hostage Earth" where he joins Baron Zemo's (Heinrich version) Masters of Evil and ends up fighting Iron Man. He is defeated when Iron Man uses his armor to absorb the Living Laser's energy form and release him into outer space. In the episode "Acts of Vengeance," the Avengers find Living Laser trapped in light form following Living Laser's encounter with Enchantress. Living Laser was incarcerated in Prison 42. What happened to him afterwards is unknown. 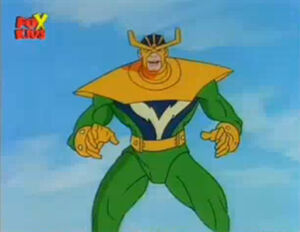 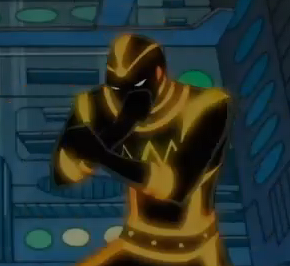 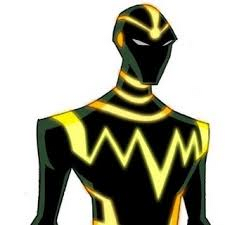 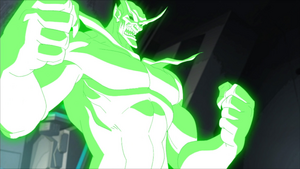