The Living Totem is a bizarre alien monster who was one of the Old West's more unusual threats and came into conflict with the Rawhide Kid.

A stranded alien who crashed in the American southwest, the Living Totem wished to destroy all humans he came across. The Rawhide Kid speculated that native medicine men must have stranded him deep underground to prevent his reign of terror on mankind. He was accidentally freed when Ben Bragg, the foreman of the silver mine above where the Living Totem was trapped, blasted too deep, awakening and freeing the alien. The Totem vowed to resume his attack on humanity, leaving a trail of destruction in his wake. He was confronted by the Rawhide Kid, however, who had been working at the mine in order to hide from a posse that had been chasing him across the desert. Several times the Kid thought he was done for, but managed to evade the alien's assaults, until the Totem trapped him, the posse that had been chasing him, and the mine workers all within the mine to starve to death. The Kid was the only one of the men small enough to crawl through a hole in the mine wall and escaped to confront the Totem again, leaving the others to think that he had abandened them. This time the Totem vowed to crush the Kid, but with one last lunge, the Kid managed to knock the alien over the edge of Bottomless Canyon, to what the Kid believed to be his death.

The Living Totem, however, survived as he was later recruited as the ultimate weapon in an 1800s league of crime headed by the Iron Mask. When the rest of the Mask's veritable army of villains, which included Dr. Danger, Fat Man, Hurricane, Rattler and the Red Raven, were defeated by the combined might of Phantom Rider, Two-Gun Kid the Rawhide Kid and the West Coast Avengers, who had been sent back in time by Dominus, he summoned his ultimate weapon, the Living Totem to turn the tide of battle in his favor. The Totem proved to be no match for the Avengers, however, as Mockingbird tripped his legs and Iron Man buried him under a cliff.

The Living Totem possesses superhuman size, strength and durability. Presumably these are typical attributes of a member of the Totem's race. 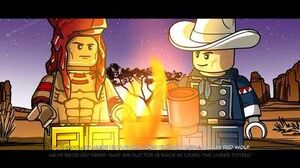