Wandering back and forth on the platform

Livingstones are limbless creatures, with green skin, brown clothes and a hat. They also have black mustaches and big noses, but no visible mouths. In the Game Boy Advance version of Rayman Raving Rabbids, they looks differently: no visible noses or mustaches, only visible mouths. In Rayman Origins, their personal appearance also changes little bit: They now have limbs, have long nose, visible mouths, and look much more ugly overall.

Livingstones are types of the enemies that appear only in levels of the Dream Forest, walking through the area. Rayman must avoid them and destroy them in one hit, as they go crazy and start chasing him. However, there are more ways to destroy them: do a grimace to frighten them, make them fall into water or throw a plum onto their heads (also a good platform to reach higher places).

It is also good to avoid their smaller versions, so-called Small Livingstones, that are more aggressive than the bigger ones.

Although Livingstones do not appear in the game, a pictures of them with a plum on their heads are seen on platforms where Rayman must throw a plum on.

Livingstones reappear in the Forest world of the Game Boy Advance version of Rayman Raving Rabbids. However, they are now known as Explorators. Also, they do not have visible noses or mustaches anymore, but only visible mouths. Their clothes also changed. They carry sacks every time and can use their hats as a weapon, but can be defeated when Rayman punches them.

Livingstones (now known as Lividstones or the lackeys of the Hunters) are also the enemies from Rayman Origins. They also look differently: they are no more limbless, have visible mouths and longer noses. Also, they do not drive crazy when Rayman punches or does a grimace at them, but they still can attack him by throwing their hats. As it is revealed in the game, they like bullying Lums. There are various types of Livingstones in the game, with different weapons, like bamboo sticks.

Livingstones return as enemies in upcoming Rayman Legends as a murderous gang of greedy bandits who violently break into the houses of Green Teensies. Their personal appearance is also more bandit-like: they wear blue hats with a red feather, blue pants, brown vests, and orange bandannas. Their main weapons are planks with pointy nails and parachutes. Now Murfy is needed, as he can cut their parachutes, or tickle them to stun them and let other characters to attack them. He also can grab them and move them wherever he wants, but these aforementioned abilities are exclusive to the Wii U port. 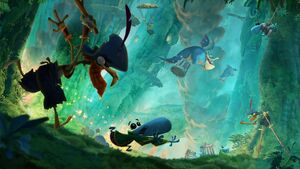