NOTE: This article is about the incarnation of Lizard from the 2012 film The Amazing Spider-Man. The mainstream version can be found here: Lizard (Marvel).

Trying to create a world without weakness.

Trying to recreate his missing arm.

Mutate everyone in New York City into reptilian humanoids, so as to change human life and create a world without weakness (failed).

A brilliant geneticist who worked for Oscorp, he intended to use his research to provide means of regeneration for those who lost limbs, but his serum ended transforming him into a monstrous, mutated human-reptile hybrid deluded into doing the same to the rest of New York. Despite this, he is a mentor to Peter Parker.

He was portrayed by Rhys Ifans, who also portrayed Eyeball Paul in Kevin & Perry Go Large, Adrian in Little Nicky, Vladis Grutas in Hannibal Rising, and will portray Grigori Rasputin in The King's Man. In the video game, he is voiced by Steve Blum.

One of the leading scientific minds, Dr. Connors attempts to engineer a revolutionary regeneration serum to help re-grow limbs and human tissue. He worked with Richard Parker on the cross-species genetics theory, but when Richard disappeared, all seemed lost until Connors met Peter Parker, Richard's son.

Their first meeting occured when Peter and his friends are having tour in OsCorp tower, where Peter learned that Connors is used to be a friend of his father. Later, Peter visited him again, where Connor thought that he came for autograph. Instead, Peter introduces himself as Richard Parker's son and gives Connors his father's "decay rate algorithm", the missing piece in Connors' experiments on regenerating limbs, which is especially important to Connors since he is missing his right arm.

Afterwards, with Peter's help, he managed to complete the formula and tries it on the guinea pigs, two white mouses named Fred and Wilma.

Fired and Test the Formula to Himself

The news of his success comes to Ratha's ear, where he then comes and demand him to use the formula on human trials as the dying Norman Osborn requires it for fully healed from his sickness. Connors refuses, as he doubt it's success as so far, he only tests it on the lab rats. Infuriated, Ratha coldly fires him.

In response, Connors instead did the test on himself, and as the formula runs through his veins and affect his DNA, he passed out over the excruciating pain during the process. When he awoke hours later, he notice that his missing arm now regenerated, covered by scaly cocoon-like layer. He then slowly tear the layer, revealing that not just his arms growing back, his fingers also did the same, albeit yet to grow nails. Though he did regrow his arm, the serum had an unfortunate side-effect which resulted in him slowly becoming turning into a man - lizard hybrid.

Horrified by what would happened to him, Connors immediately after Ratha in case of him to learned whether he learned about the formula yet. As he entered a taxi, his newly regenerated arm shifts into reptilian form, with the taxi driver unaware with this. Connors demanded him to drive the taxi just as his face covered by scales. Then He becomes a giant lizard monster, and breaks out of taxi after arriving at the bridge. Connors begins walks to the Williamsburg Bridge and begins throwing cars off the bridge, until Ratha's car and throws it off the bridge, but Ratha, along with the people in the other cars thrown off the bridge, is saved by Peter, calling himself Spider-Man. Connors then awakens in the sewers where he sets up a underground lab for his experiments.

Escape and Suspected as The Lizard by Peter

After his transformation, the next day at Oscorp Connors finds Peter there, and Peter asks how a predator would catch a reptile. Connors tells him that they can't since most reptiles are predators at the top of there food chain. Connors then dismisses Peter telling him that he is working on a secret project, not knowing that Peter figured out that Connors is the Lizard after he finds that Fred has mutated into reptilian hybrid and has eaten Wilma. He then is pursued by Peter as Spiderman and fought with him in the sewers. After the fight, Peter escapes injured. The Lizard however, discovers that Peter is Spider-Man when he finds Peter's camera, that he intended to use to get a picture of him. Later that night Connors begins thinking about to after learning Peter is Spider-Man, he takes the serum and decides not let Peter stop with his plans.

The next day, The Lizard enters Peter's high school, Midtown Science High School, through the bathrooms. Then he enters the halls of the school, where almost everyone runs out of the building terrified. He then confronts Peter and tries to attack him, then explains how he make sure there are no more outcasts in the world, and there no need to stop him. Peter gets into his Spider-Man costume and tries to convince The Lizard to stop what he is doing, telling The Lizard it isn't him, but he does not listen. The two begin to fight in the school, before the Lizard manages to subdue Spider-Man. However, Gwen Stacy, Peter's girlfriend and Dr. Connors' intern at Oscorp, helps Spider-Man by hitting the Lizard with a trophy. When The Lizard tries to attack her too, Spider-Man traps him in his webs. After Spider-Man gets Gwen to safety, The Lizard breaks free from the webs and then hears police sirens coming toward the school. After the two continue to fight in the school library, The Lizard overpowers Spider-Man and then escapes back into the sewers. After Peter follows him into the sewers and finds the underground lab, he learns from a video that Connors believes there is no perfect human being and that he plans to infect the city with the serum with the Ganali disbursement device from top of Oscorp tower, and turn everyone into reptilian hybrids like him.

After The Lizard begins to walk towards Oscorp with the serum, he is confronted by members of the NYPD SWAT team who shoot him on sight. But The Lizard quickly heals and defeats the SWAT team members and infects them with the serum. He then begins continues toward to Oscorp, and infecting more people with the serum. Upon arriving at Oscorp, The Lizard begins climbing up the tower, then goes into his lab for the Ganali device, but he finds it missing. The Lizard then finds Gwen, who was making antidote for the serum, hiding with Ganali device. He then takes the device and Gwen uses a blowtorch to burn him but it does not affect him and The Lizard for the top of Oscorp Tower.

Battle on the Oscorp Tower and Defeat

On top of Oscorp Tower, the Lizard and Spider-Man get into a fight. Lizard then chokes Spider-Man until Captain George Stacy arrives and shoots the Lizard multiple times, buying Spider-Man time to get free and retrieve the cure to Connors' mutagen from Stacy. The Lizard recovers and fatally wounds Stacy. He then attempts to stop Spider-Man stopping the Ganali device from unleashing his lizard formula but fails as Peter loads the antidote into the machine. Once exposed to the antidote, the Lizard transforms back into Connors, who saves Peter from falling off the building, and everyone who was infected with the serum reverts back to normal. Connors is then arrested.

During the credits of the film, Connors is in prison. He then meets a character credited as "The Man in the Shadows," asking him if Connors told Peter the truth about his father, Dr. Richard Parker. Connors replies "no" while the darkened figure says "Well, that's very good." Before returning to the credits of the film, Connors gives out his last words by stating "You should leave him alone!"

In the video game

In the 2012 video game, Dr. Connors is a supporting character, assisting Spider-Man and Gwen Stacy against the machinations of Alistair Smythe and his army of S-Bots in the wake of an outbreak of cross-species hybrid test subjects. Near the end of the game, Connors is forced to reinject himself with his serum and become the Lizard once more in order to fight against Smythe. However, due to the mental regression, the Lizard ends up being the final boss of the game. After his defeat, he reverts back to Connors, and willingly returns to his sentence. 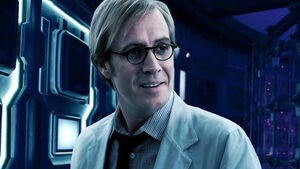 Dr. Connors before his transformation. 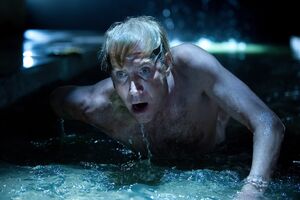 Dr. Connors after his first transformation in the sewer. 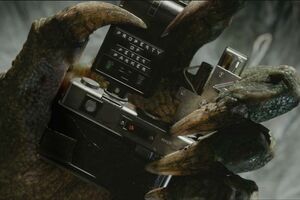 Connors as The Lizard strangling Spidey in the sewer.

The Lizard finding out that Peter is Spider-Man. 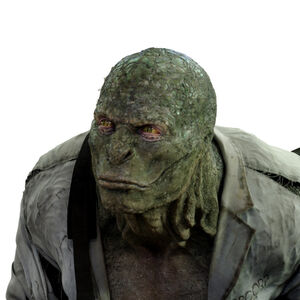 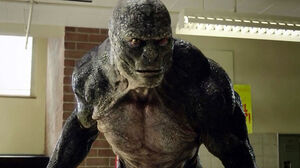 The Lizard about to attack Peter at School 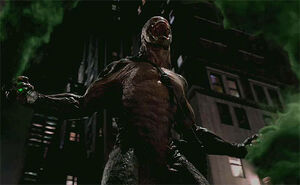 The Lizard spreading his serum through New York

The Lizard attacking the Police 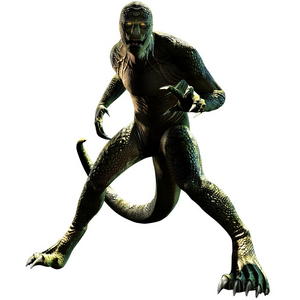 Lizard in The Amazing Spider-Man: The Video Game.

Connors with his son (Deleted Scene) 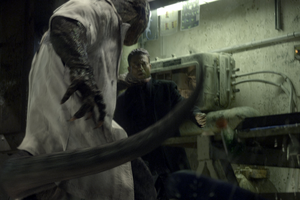 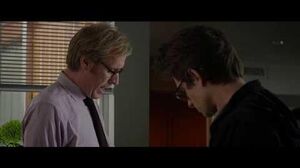 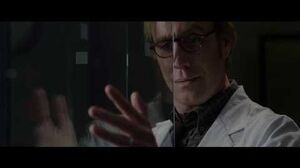 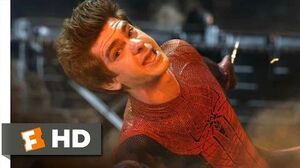 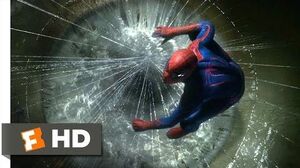 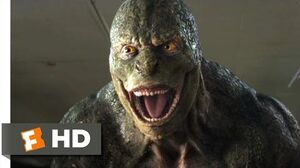 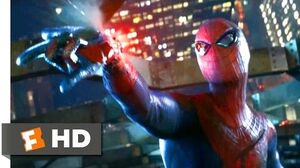 The Amazing Spider-Man - Spider-Man vs. The Lizard Scene (9 10) Movieclips