Lizard (The Hills Have Eyes)

The Hills Have Eyes

Lizard is a mutant and the main antagonist appearing in the 2006 remake of the horror movie The Hills Have Eyes. He is a hunter for a cannibal mutant clan that lives in an abandoned nuclear village hidden on the desert. They were born deformed by heavy exposure to radiation.

He was portrayed by Robert Joy.

Lizard punctures the tires of a family (the Carters) who were traveling to the desert so they can capture them, although it looks like an accident it was made by Lizard's makeshift spike strip. Later that night he and his cousin Pluto, whom he constantly bullies, attack the trailer of the Carters after another mutant sets Big Bob on fire while being tied to a decrepit tree, creating a distraction that causes every other Carter but Brenda to go outside, as he enters the trailer he eats the food stored on the refrigerator and drinks some milk, then he spots a bird and cuts its head off with a bite and then he drinks the blood of the animal.

After seeing Pluto's unsuccessful attempt to rape Brenda he decides to make it himself, violently taking him away and telling him "you gotta be a man to do it". He then proceeds to rape Brenda and then he focuses his attention of Catherine Carter (Doug's and Lynn's baby).

As Lynn enters the trailer she hits Lizard with a pot but Lizard manages to incapacitate her and forces her to breastfeed him while pointing a gun to Catherine's head. As Ethel (Lynn's, Brenda's and Bobby's mother) enter the trailer she attempts to hit Lizard's head with a rock but Pluto warns him and Lizard shoots Ethel in the stomach with the Magnum, causing her death a few minutes later. Enraged, Lynn stabs lizard on the leg with a screwdriver, causing him to shoot her on the head as Brenda watches in horror.

He then takes Brenda outside and attempts to kill her but as the gun has run out of bullets and Doug and Bobby were returning he and Pluto escape, the latter taking Catherine with him, but not before threatening Brenda that he will be back to kill her. Seeing that the mutants have killed his wife and taken his daughter he decides to hunt them down and he eventually finds them, but as he was looking for Catherine, Lizard prepares to kill her, only to find out that Ruby (Lizard's younger sister) has taken the baby with her. He then starts chasing Ruby but is intercepted by Doug, the two engage in a brutal fight, with Doug almost being killed, and Lizard continues chasing Ruby.

But Doug then manages to stand up and intercepts him again, then he proceeds to brutally beat Lizard with a shotgun and shoots him two times in the stomach and one in the neck, then Ruby gives Catherine back to Doug. Lizard, who somehow survived Doug's onslaught, tries to shoot him with the shotgun but Ruby sacrifices herself tackling Lizard, plunging them over a cliff. His screams can be heard as he and his sister Ruby fall to their deaths. 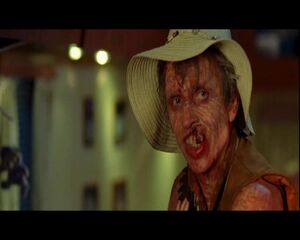