The Lizard King is a minor antagonist in the Don Bluth arcade game, Dragon's Lair. 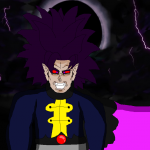