Though he is well known as the hero and main protagonist, Lloyd himself actually have his villainous moments which mirrors his father Lord Garmadon: In Season 1: Rise of the Snakes, he took villainous role as a annoying and incompetent villain-wannabe who neither competent nor pose significant threat (except freeing Serpentine from their prisons) due to only motivated by petty reason. Although, in Season 5: Possession, he become evil once more as result of Morro's possession and gained Morro's ghost powers as result. In latter case, he considerably become worse threat, similar with Garmadon when enduring Overlord's corruption.

Lloyd appeared in Jamanakai Village, throwing toy snakes at the residents and demanding their candy. When the Ninja arrived, they were surprised to see a boy instead of the fearsome Lord Garmadon, prompting Lloyd to explain that he was the dark lord's son. He threatened to unleash the Serpentine on the Ninja if they didn't surrender, but the unimpressed heroes hung him on a sign, where the irate villagers pelted him with fruit for his trickery.

Eventually, Lloyd escaped, swearing revenge on the Ninja. He ended up wandering into the icy Glacier Barrens, where he stumbled upon a strange tomb. Curious, Lloyd opened the tomb and fell inside, where he met the Hypnobrai, a tribe of real Serpentine. The Hypnobrai General, Slithraa, attempted to hypnotize Lloyd, but the would-be evil overlord slipped on the icy floor, causing Slithraa to stare at his own reflection in the ice. Thus hypnotized by his own attack, Slithraa accepted Lloyd as his master, and Lloyd immediately ordered the Hypnobrai to Jamanakai Village to take his revenge.

With the Serpentine at his side, Lloyd quickly subjugated the village, stealing all of its candy for himself as the Hypnobrai mesmerized the villagers. When the Ninja returned, Lloyd watched the battle until the Ninja managed to steal Slithraa's staff, prompting him to call a retreat

In Season 5 of Ninjago, as result of Morro's possession, Lloyd wind up become evil and sought to find the way to free Preeminent from cursed realm. Unlike when he still an incompetent villain, this time he proved to be a significant threat due to Morro's influence. Fortunately, Lloyd returned to the good side once Morro eventually freed him as he outlived his usefulness. 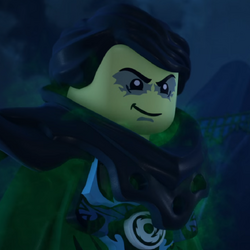 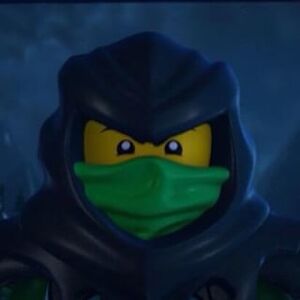 Retrieved from "https://villains.fandom.com/wiki/Lloyd_Garmadon?oldid=4223979"
Community content is available under CC-BY-SA unless otherwise noted.