One of the Four Fangs

Kill corrupt nobles and protect the poor. Avenge his brother (if Linus dies before him)

Lloyd Reed is a major antagonist in Fire Emblem: The Blazing Blade (previously simply called Fire Emblem in the United States and Europe, Rekka no Ken in Japan). He and his younger brother Linus make up two of the Four Fangs in the assassin guild the Black Fang, which was founded by their father, Brendan Reed.

Little is revealed about Lloyd prior to the formation of the Black Fang, but what is revealed is that after its formation, he and his brother quickly climbed up the ranks and became apart of the legendary Four Fangs. Lloyd typically has to keep his brother in check, due to his compulsive and hot-headed personality, and would in the end result in the two of them to be inseperable. Lloyd also held high respect for his father and guild, as he believed when the Fang's judgment is placed, it could not be undone. However, when Sonia married his father, and brought Nergal with her, he began to distrust certain actions but would carry out his orders none the less.

Following a near fatal wound inflicted upon Nergal, by the hands of Lord Elbert, Sonia gathers Lloyd, his brother and the other two Four Fangs to kill the Lycian lords, Eliwood, Hector and Lyndis, by falsely declaring them to be corrupt nobles. Despite some lingering suspicion, Lloyd vows to bring the Fang's judgment upon the lords and goes after them. Depending on how well the player leveled up the three lords (their combined levels exceed 50), determines when and where Lloyd will confront them.

During the lords' final confrontation with Nergal, Lloyd is resurrected as a morph to combat the lords. He is eventually slain by them and his soul is allowed to finally rest in peace.

Much unlike his younger brother, Lloyd is always calm and composed, no matter the situation at hand. On the flip side, he and his brother do share an undying loyalty to the Black Fang and their father, despite how much he resents Sonia's newfound grip over the Black Fang. Following his brother's death, if Linus is slain before him, Lloyd retains his calm personality despite being overwhelmed by a strong sense of vengance. 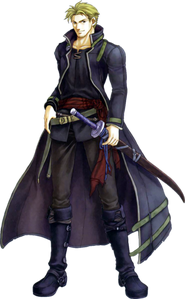 Lloyd's Artwork from Fire Emblem: The Blazing Blade
Add a photo to this gallery

Retrieved from "https://villains.fandom.com/wiki/Lloyd_Reed?oldid=4021938"
Community content is available under CC-BY-SA unless otherwise noted.