Villains Wiki
Register
Don't have an account?
Sign In
Advertisement
in: Kamen Rider Villains, Evil from the Past, Leader,
and 27 more

Reflecting and countering any of the ten Heisei Kamen Riders attacks.

Ruling the World of Amazon.

Obtain the GiGi Armlet from Amazon and use the unlimited ancient Inca powers to complete his master plan of converting humans into monsters.

Ten-Faced Demon Llumu Qhimil is a major antagonist in Kamen Rider Decade. He is the leader of Geddon and Dai-Shocker's designated ruler of World of Amazon. He developes the mindset that Kamen Riders are the enemies of the human race, rather than Geddon.

He was voiced by Hideo Ishikawa.

He has the GaGa Armlet and seeks Amazon's GiGi Armlet to gain their full power and use the unlimited ancient Inca powers to complete his master plan of converting humans into monsters. He normally resembles a torso attached to a large boulder, but he can also assume a humanoid form adorned with the faces of the ten Heisei Kamen Riders from which he can access their powers and counter any of the ten Heisei Kamen Riders attacks. Though he gains the GiGi Armlet, he loses both it and the GaGa Armlet to the Kamen Riders with Decade Complete Form weakening him with Faiz Blaster Form before Amazon destroys him with the Super Dai Setsudan.

Due to a change in history caused by Ankh leaving a O-Medal behind in the year 1971, Shocker achieved its goal of world dominion with the Shocker Greeed and new members from various other groups gathered around Shocker. Llumu Qhimil, Geddon's representative, was one of the many villains who were part of Shocker's alliance.

Llumu Qhimil was revived as part of Dai-Shocker in the "super hero taisen" incident which saw them clash with Dai-Zangyack under Tsukasa Kadoya then joining forces with them under Doktor G and facing off against the combined forces of the Kamen Riders and Super Sentai. He doesn't have a highlight in the final battle, but he is seen fighting GoseiRed when Tsukasa is out to kill the Tensou Sentai Goseiger, when he is really sending them to the dimensional drift along with the others

Llumu Qhimil revived with other Kaijins to join forces Underground Badan Empire. He was part of a force comprised of General Shadow, Marshal Machine, Doras, and Girizames sent to invade the surface and attack the Armored Riders to kidnap Shuu Aoi for the plans. When the Space Break System has risen, Generalissimo of Badan summons the other villains, Kaijins, henchmen army to eliminate Ryo Murasame and Gaim. Ryo reveal Heisei and Showa Riders that they supposedly been defeated had in fact been sent to Helheim Forest, to help support Ryo and Kamen Rider Gaim. Llumu Qhimil and Destron Combatmen battling Kamen Rider Amazon on top of the building roof. 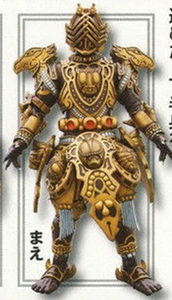