Villains Wiki
Register
Don't have an account?
Sign In
Advertisement
in: Magic, Evil from the Past, Movie Villains,
and 42 more

Marry a woman with green eyes to regain his human form then sacrifice her to please his emperor god.

Return from beyond the grave
Conquer the universe. (All failed)

Lo-Pan, sometimes written as Lo Pan, is the main antagonist in the 1986 action/comedy film Big Trouble in Little China. He is a merciless and conniving sorcerer who just wants to have flesh again in order to rule the universe. Lo-Pan has a legion of followers who will die to protect him and three skilled martial artists with supernatural and elemental powers at his side, named Thunder, Lightning and Rain whom together are known as The Storms.

Centuries ago, Lo-Pan, a great warrior, but most of all a powerful wizard, was defeated in battle by the first sovereign emperor Qin Shi Huang. The Emperor placed upon Lo-Pan the Curse of No Flesh. Although Lo-Pan can be temporarily granted a decrepit body by supplication to the gods, in order for him to permanently break the curse and regain his human form, he must marry a woman with green eyes. This simple act will appease Ching Dai, the God of the East. But to satisfy the Emperor, he must sacrifice her.

As he describes his curse, Ching Dai has promised him that if he finds a very special girl with green eyes he would be able to transcend his weakened mortal form and ascend to a greater existence to rule the world. For centuries, Lo Pan searched for a woman with green eyes, and although he did find some, clearly none of them were suitable for him.

Lo Pan, under the modern alias "David Lo-Pan", disguised himself not only as a crippled old man in a wheel chair, but also as the head of a trading company called the Wing Kong Exchange, employing an army of soldiers to do his bidding.

Miao Yin and the Storms

The street gang, the Lords Of Death, kidnap a woman with green eyes named Miao Yin, the fiancée of Wang Chi, at an airport. Wang and his friend Jack Burton, a wily truck driver, search for Miao Yin in Chinatown. Turning onto a tiny alley with Jack's semi truck, Jack and Wang witness a funeral for Lem Lee, one of Lo Pan's enemies whom he ordered to be assassinated. The funeral is interrupted by Lo Pan's soldiers, the Wing Kong, and an all-out brawl takes place between the Chang Sings and the Wing Kong. Lo-Pan's assassins, Thunder, Lightning and Rain descend from the stormy sky and begin to slaughter everyone in the street fight.

As Jack and Wang try to escape in their truck, they apparently run over Lo Pan. This is revealed to be a ghostly trick of the mind created by Lo Pan, who almost blinds Jack with powerful magic. Jack and Wang manage to escape. Back at Wang's restaurant Eddie and Wang look on as Uncle Chu and Egg Shen explain the nature of Lo Pan. The lawyer, Gracie Law, comes in and tells them that the Lords Of Death sold Miao to the White Tiger's brothel. Then Jack, in disguise, attempts to infiltrate the brothel but the Storms show up and kidnap Miao.

Miao Yin is taken to the Wing Kong Exchange, and during their pursuit, Jack and Wang are captured and taken to Lo Pan, who is under the guise of the crippled old man David Lo-Pan. Lo-Pan reveals his motives to them both before having them locked up, then later kidnaps Jack's friend Gracie Law, who also had green eyes. Lo Pan plans to marry both Gracie and Miao Yin, then sacrifice Gracie to appease Ching Dai and live out his earthly pleasures with Miao Yin.

Lo-Pan begins his ceremony with his many followers gathered around him and his two brainwashed brides present at his side. As he goes to insert the Needle of Love into Miao Yin, his ritual is interrupted by the arrival of Jack, Wang and the wizard Egg Shen, as well as an ancient society of warriors called the Chang Sing. A huge battle ensues in which Wang kills Rain during a sword fight and the Chang Sing defeat most of Lo-Pan's followers.

As Lo-Pan and Thunder take Miao Yin to the sorcerer's private headquarters, Jack and Gracie follow them and confront Lo Pan in a corridor. Wang appears and distracts Thunder, allowing Jack to throw his knife at Lo-Pan. He unfortunately misses and Lo-Pan picks it up, admiring it for a second. He then throws the knife back at Jack who immediately catches it midair and hurls it straight into Lo-Pan's forehead, killing him.

Thunder later returns and sees his master dead on the floor. The sight proves to be too much for him and in his anger, his body inflates to an enormous size before exploding. Later, Egg Shen manages to kill Lo-Pan's final assassin, Lightning, by dropping a Buddha statue on his head.

Though Lo-Pan remained dead, the comic series, which served as sequel for the film revealed that at one point in his life, he has turned a yeti-like demon into one of his servants via dark magic bond, in which the demon itself is the same creature that sneaked into Jack's truck by the end of the film. The demon seemingly tried to kill Jack to avenge its master, but when Jack taunted it into fighting it, it unexpectedly started to behave friendly to him, much to Jack's confusion. Jack later learned that because he murdered Lo-Pan, he unknowingly inherited the dark magic bond that Lo-Pan put on the beast, resulting on it switching its allegiance to Jack.

Lo Pan is a dark sorcerer with immense powers that not something to be toyed with, as noted by Uncle Chu and Egg Shen. 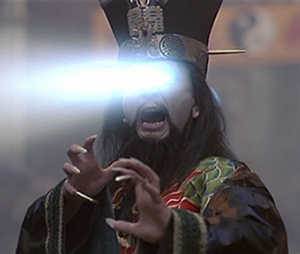 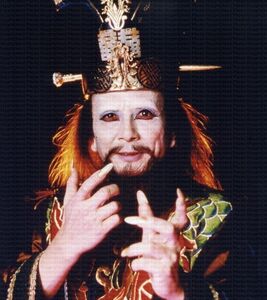 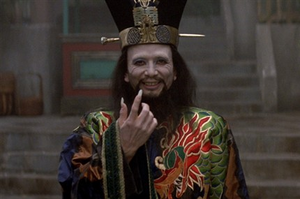 Lo-Pan smiling evilly before getting run over by Jack Burton. 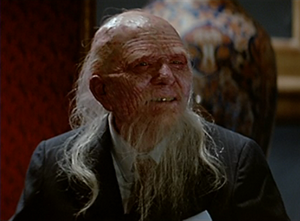 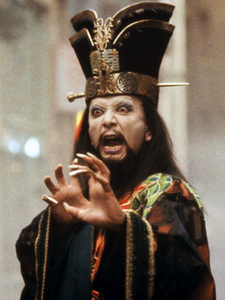 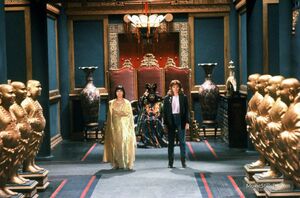 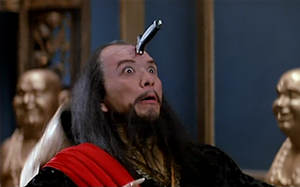 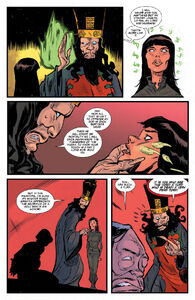 Lo-Pan in the Big Trouble in Little China comic book.