Find someone to bosses around.

In the episode "The Urchin"  They convent a merboy named Urchin and tricking him that he is their friends. After Ariel taught him that they were just using him and later abandoned them. In another episode "Double Bubble" they kidnapped twin that Ariel was babysitting to steal the mother necklace. In another episode "Thingamajigger" they found a boot along with Evil Manta mistaking as a weapon.

Lobster Mobster is a red-purple American Lobster with pink belly and tail, having dark purple line reassembling like a purple vest along with maroon pincer and legs. Wear a dark blue nautilus shell as a hat.

Da Shrimp is a shrimp with light orange skin and light pink fins with candy yellow eyes. With whiskers coming out its face and also wear a light blue nautilus shell as a hat.

They are a couple of dimwitted criminals that are cruel and mean to each other and somewhat sly. and according to Sebastian the Crab as "The most criminal crustaceans on the face at the bottom of the sea". 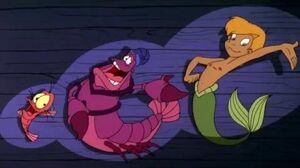 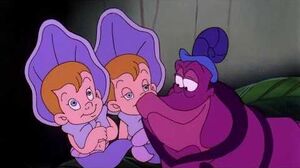