The Sum Of All Evils

Source of all things evil

Corrupt all life and rule over the dystopia it creates (failed).

The Loc–Nar is the main antagonist of the 1981 animated film Heavy Metal, based on the pulp magazine of the same name, one of the stories in this magazine being Den by Richard Corben from which Loc-Nar originates, although he's a powerful artifact there and not a living entity, and his name is spelled Locnar. Its form is that of a basketball-sized glowing green sphere and it describes itself as "the sum of all evils" and can melt people upon contact.

At the beginning of the film, it is found by an astronaut named Grimaldi, but then kills him in his home when he tries to handle it and then attacks his daughter, forcibly telling her horrific stories which all involve it in some way. These tales subsequently form the bulk of the movie.

It was voiced by the late Percy Rodriguez.

The Loc-Nar is of unknown origin. It seems to be an intergalactic traveler and seems to desire to consume everything it approaches. An orbiting ferry over Earth descends in the middle of the North American plains and a Corvette dropped from the cargo section freefalls until a parachute opens and it drops onto the road; the car is then driven by an astronaut to his home where he parks and disembarks carrying a briefcase with an ominous glow.

Grimaldi, the astronaut from the previous section, enters his house where his daughter waits for him, the man opens the briefcase and shows her glowing green crystalline sphere, which almost immediately pulsates, disintegrating the man. Later, it corners the girl and presents itself as an unstoppable force that is "the sum of all the evils" that corrupts and destroys everything throughout time and history; to prove that this is true, it allows the girl to live for that night while it tells her stories of the places it has visited and the tragedies it has caused.

In a futuristic city, Harry Canyon is a cynical and rude taxi driver who confronts the thieves who try to assault him by disintegrating them with a hidden weapon installed in the passenger seat. One day he rescues a girl who runs away from a mobster named Rudnick who murdered her father, an archaeologist who had discovered the ancient sphere. Rudnick now chases the girl to discover the artifact's location. The next day, after sleeping with the girl, Harry is intercepted by Rudnick who demands that he hand over the sphere. After conferring with the girl, they decide to sell it to the mobster and split the money. After the transaction, the sphere disintegrates the mobster while the girl betrays Harry and threatens to kill him to keep all the money; the taxi driver unflinchingly murders her with the blaster of his taxi, keeps the money and continues his day.

A puny and unattractive adolescent nerd picks up a meteorite shaped like a green sphere and after using it in experiments with electricity, is transported to a world of sword and witchcraft where his body transforms into that of a powerful warrior who takes the name Den. There he rescues a young woman who would be sacrificed, who explains that her name is Katherine and was transported from Earth in the same way. Later an immortal named Ard orders him to steal the Loc-Nar from the Queen, which he accomplishes after many adventures. On his return, he must again rescue Katherine before she is ritually sacrificed by Ard. During a subsequent confrontation between Ard and the Queen over the Loc-Nar, the results of Den's experiment seem to be repeated as the squabbling pair disappears in a flash of lightning. After defeating his enemies, he leaves with Katherine on a trip through that world, reasoning that there is no reason to return to a world where he is a loser if he can live where he is a warrior and hero.

In a space station Captain Sternn is tried in court for multiple crimes ranging from treason to a traffic ticket. Sternn pleads innocent, having bribed the witness Hanover Fiste to speak on his behalf. When Fiste goes to the court he picks up a marble that turns out to be the Loc-Nar and fiddles with it while giving a statement. In the midst of the compliments to Sternn, he begins to lose his composure and reveal more crimes that he has committed and finally goes mad until he becomes a bloodthirsty monster that chases the captain throughout the station to kill him and murdering anyone who crosses his path. Finally, he corners Sternn in an empty section of the station where Sternn offers Hanover more money which calms his demeanor. Sternn then traps Hanover in an airlock wherein he is shot out into space still clutching the Loc-Nar.

During the Second World War, a B-17 bomber named "The Pearl of the Pacific" is kept in flight during a theater that causes serious damage to the ship. In the middle of the combat, the Loc-Nar falls from the sky and it is embedded in the tail of the airplane reanimating the corpses of the soldiers dead in the confrontation that immediately begin to attack and mutilate the survivors. While the plane rushes, only the pilot survives by bailing out; not knowing he has fallen on an island-graveyard of airplanes full of corpses that begin to wake up thanks to the power of the sphere.

A scientist meets with the people of the Pentagon to explain the cause of certain mysterious mutations and to deny that there are extraterrestrials provoking them. However, in the middle of his speech he notices that Gloria, the secretary in charge of the transcripts, is wearing the Loc-Nar om a necklace and goes mad trying to rape her in full view of the assemble. At that moment, an alien ship appears and abducts the scientist, accidentally taking Gloria along. Inside, aliens Edsel and Zeke and a robot are present to receive the doctor. The scientist turns out to be a malfunctioning android used for alien cover-ups. After this, the mouse-eared robot seduces Gloria and initiates plans for marriage following their copulation. While Edsel and Zeke get high with the ship on auto-pilot, the craft ends up crashing into the hangar of their destination.

The Loc-Nar falls into a distant world inside a volcano and there expands its corruption, transforming a nomadic tribe into bloodthirsty mutants; immediately they go to a peaceful city and massacre its inhabitants; before dying, a council of elders invoke the warriors of Tarak, ancient allied forces sworn to protect them or avenge the city. Taarna, a maiden with white hair and bearing the mark of the last living Tarakian, responds to the call by arming herself with her sword and rides on a giant bird to the city, finding only corpses. After tracking and killing several mutants, Taarna is captured and tortured, but manages to escape and kill the leader of the mutants in a terrible duel with Malherida. Weakened by the battles, the warrior rides its bird and goes to the volcano to face the true enemy and once on the crater immolates, destroying the Loc-Nar.

While Taarna wins in history, in the house the Loc-Nar suffers the same fate as in the final tale and begins to seathe and self-destruct, imploding the house. The girl escapes in time and with the first light of dawn discovers that her hair has turned white and the bird of Taarna awaits her. Mounting the creature, both rise and take flight, the mark of Tarak is visible on the girl's neck as the narrator indicates that the next Tarakian has been born destined to protect the universe from future evils. 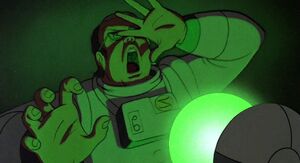 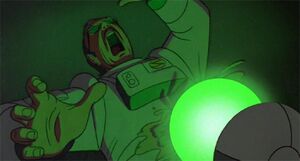 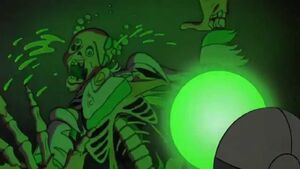 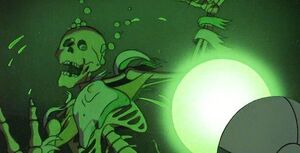 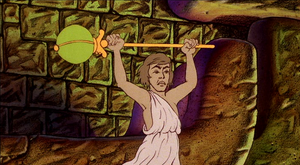