A bounty hunter for the Decepticons, an affilate of Harold Attinger, and the Puppet of Creators.

Can transform into an 2013 Lamborghini Aventador LP 700-4 Coupe, a mid-engined supercar with a top speed of 349 km/h

To capture Optimus Prime and bring him to the Creators.

Lockdown is the main Transformer antagonist in Transformers: Age of Extinction, and one of two main antagonists in the movie (the other being Harold Attinger). Answering only to his enigmatic "Creators", Lockdown holds himself above the Autobot/Decepticon war and sees both sides as squabbling children that he has to reign in personally. He doesn't think much higher of other civilized species across the galaxy (particularly humans), though isn't above working with them if it suits him.

Before Coming to Earth

Little to nothing is known about Lockdown's past before coming to Earth. What is known is that he is a mercenary and was hired by the creators of the Transformers, beings known as the Creators, to hunt down Optimus Prime and bring him back to them. He has also a deadly reputation among Autobots as both Optimus Prime and Ratchet were terrified to see Lockdown on Earth. The Creators must've given him the bomb-like device known as the Seed and he teamed up with CIA's Cemetery Wind leader Harold Attinger to hunt down the Autobots being provided unlimited access to Earth's resources. He finds Ratchet, and asks him where is Optimus, and when Ratchet did not tell, Lockdown simply rips out his spark. Afterwards, he transforms into a Aventador and left the scene.

After teaming up with Attinger, he went to Cade Yeager's farm and tried to attack the hidden Autobot leader, who kills the team sent by Attinger and escapes Lockdown's wrath. Lockdown would continue to pursue Optimus, and Lockdown kills Cade's friend, Lucas, during their escape. But in the escape, he loses Optimus, much to his anger. Later on, while Optimus is fighting the man-made Transformer, Galvatron, Optimus did not realize that Lockdown has come to take Optimus. He shoots the Autobot in the back and takes him onto his large prison ship, where he reveals that he is working for the Creators, who want Optimus back for an unknown reason. As a reward for helping him to capture Optimus, he gives the humans the Seed, a bomb that will turn the city into Transformium, the mineral that all Transformers are made of. Lockdown is about to leave for outer space, when Optimus' human allies storm his prison-ship and rescue him.

Lockdown does not give up. While the Autobots are battling with Galvatron's forces, Lockdown activates a magnetic weapon under his ship and drops many magnetic and metal things onto the battling robots. Optimus destroys the weapon and engages Lockdown in a last battle. He battles Optimus and wins. However, before he can kill him, Bumblebee shoots Lockdown in his chest and punches him while Cade is able to shoot him with the alien gun and distract him, Shane and Tessa then wrap a hook around Optimus and help him to grab his sword out of his chest, Optimus then defeats and kills Lockdown by impailing him right through the chest with the sword and dragging it upwards to his head, slicing him in half from the upper chest, killing him instantly. 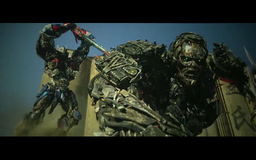 Lockdown before his death. 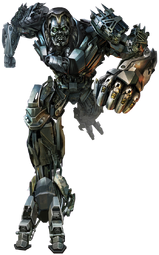 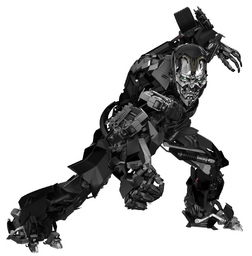 Retrieved from "https://villains.fandom.com/wiki/Lockdown_(Transformers_Film_Series)?oldid=895582"
Community content is available under CC-BY-SA unless otherwise noted.