Note: For the book version of the character, see: Vargo Hoat

Man-at-arms and hunter for House Bolton

Locke is a recurring antagonist from the HBO TV series Game of Thrones. He is considered by Roose Bolton to be his best hunter and known for having cut off Jaime Lannister's sword hand. He is the TV series' condensed version of the character Vargo Hoat from the A Song of Ice and Fire novels. He is the main antagonist of Jaime's storyline in Season 3, and later serves as a supporting antagonist in Season 4.

He was portrayed by Noah Taylor.

Locke is dispatched by Roose Bolton to hunt down Jaime Lannister. He and his men soon track down the Kingslayer with his escort, Brienne of Tarth, and take them into custody.

On route to Harrenhal Locke and his men attempt to rape Brienne, but are persuaded otherwise by Jaime, who lies, convincing Locke that Brienne's home of Tarth, known as the "Sapphire Isle", is named such due to an abundance of precious gemstones, and that Selwyn Tarth would richly reward him for returning his only child intact. Emboldened by his success, Jaime attempts to barter for his release by reminding Locke of the wealth and power of his own father, Lord Tywin Lannister. This has an adverse effect, however, and Locke, enraged by Jaime's arrogance and complacency, mutilates him by severing his sword hand.

Locke and his men continue taunting Jaime on the ride to Harrenhal, forcing him to wear his severed hand around his neck and offering him horse piss to drink. When the weakened Jaime steals a sword and tries to fight his captors, they disarm him and Locke kicks him onto the ground, threatening that if he pulls something like that again it will cost him the other hand.

Locke successfully delivers Jaime and Brienne to his Lord at Harrenhal, who is not amused by his bannerman's latest actions and orders Locke to dispose of the severed hand. Locke proposes to send it to Tywin, which prompts Bolton to tell Locke that he will hold his tongue or lose it.

As Lord Bolton leaves to attend to the wedding of Edmure Tully, Locke receives a raven from Lord Selwyn Tarth offering 300 golden dragons to ransom Brienne, but Locke refuses. As Jaime prepares to leave for King's Landing with Qyburn and Steelshanks Walton, Locke taunts him. Locke puts Brienne inside the Harrenhal bear pit for his amusement and that of his men, giving the warrior woman nothing but a wooden tourney sword to defend herself from the bear. To Locke's frustration, Jaime comes back to rescue Brienne and saves her from the pit with the aid of Steelshanks, who has no choice but to help Jaime to fulfill Lord Bolton's orders.

Locke reunites with his lord and assists Bolton with evading the ironborn forces in order to reenter the North and deliver his new bride to the Dreadfort.

Locke evidently enjoys a strong relationship with Bolton's bastard son, Ramsay Snow, greeting him like an old friend, and japing over their shared sadism. After Ramsay reveals to his father that Bran and Rickon Stark are alive, Lord Bolton promises Locke 1,000 acres and a holdfast if he finds the two boys.

At Castle Black, Locke infiltrates the Watch with the new recruits trained by Jon Snow and Grenn, proving himself skilled in combat. He poses as a one-time poacher from the Stormlands who chose to take the black rather than losing his hand, the penalty for hunting a partridge to feed his children. When Jon Snow's expedition to capture or kill all the betrayers at Craster's Keep is sanctioned by Alliser Thorne, Locke volunteers to go. Jon points out that he cannot take a recruit, but Locke counters that Jon needs men who know how to fight and is willing to say his vows already.

After the Night's Watch group led by Jon Snow arrive at Craster's Keep, Locke is ordered to scout ahead. While scouting, Locke encounters the hut in which Bran, Jojen and Meera Reed, and Hodor are held prisoner. Locke returns to Snow and the others to give his report on the mutineers, but lies about the hut with the prisoners, claiming that it is a kennel and that they should stay far from it so the hounds do not alert the traitors. The raid takes place that night. While the others fight, Locke goes to Bran and the others and introduces himself as a member of the Night's Watch's rescue party, but soon exposes himself as a threat when he slices Bran in the leg and threatens to gut the others in order to identify him. Locke picks Bran up and carries him into the woods, but during this process Bran enters the mind of Hodor, who ambushes Locke and kills him by partially tearing his head off his neck.

Locke's body is brought back to Craster's Keep by Eddison Tollett. Grenn openly wonders what could have killed him. Jon then orders his body to be be burned inside Craster's hut along with the other slain.

After the Bolton army drives the remaining ironborn from the North and takes Winterfell, Roose Bolton asks Ramsay if he has heard anything from Locke, which Ramsay denies. However, Roose dismisses Locke's absence as unimportant, speculating that Bran and Rickon may already be dead. 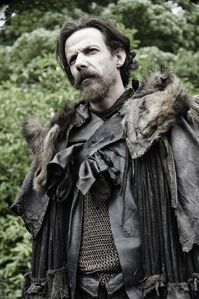 Retrieved from "https://villains.fandom.com/wiki/Locke?oldid=3848555"
Community content is available under CC-BY-SA unless otherwise noted.