Locomon is the possessed object of Parasimon and one of the main villains in the film Digimon Tamers: Runaway Locomon.

A Locomon was seen in the train tracks. Hypnos notice that he's going around in circles and when he does that a portal between the Real World and the Digital World. The Tamers found out that Locomon was under the control of a Parasimon. The Parasimon wanted to Locomon to go faster so he forced Locomon to Digivolve into GranLocomon. After all the Parasimon were defeated, Locomon rode into the portal, never to be seen again.

Locomon is an Ultimate Class Digimon that resembles a locomotive with bloodshot eyes, which in the end became green after Parasimon's defeat. 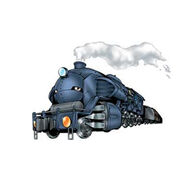 Retrieved from "https://villains.fandom.com/wiki/Locomon?oldid=3550188"
Community content is available under CC-BY-SA unless otherwise noted.