Threaten any encountered life-form or species within all galactic quadrants

Assimilate all species into the Borg to bring chaos

Locutus was created when the Borg assimilated Jean-Luc Picard to act as the Collective's voice to the Federation, to prepare the people of the Federation for assimilation. Locutus ceased to exist when the link with the Collective was severed and Picard was returned to normal. The memory of his time as Locutus would haunt Picard for many years to come.

Locutus returned in 2376 when, in the first stages of an invasion of the Alpha Quadrant, the Borg assimilated a Dominion cloning facility and recreated the assimilated form of Picard.

This Locutus led the Borg invasion, and in one timeline succeeded in the complete assimilation of the Federation leading the Borg forces to take Earth. However, with the help of the USS Premonition Picard was able to take the USS Enterprise-E back in time to prevent the Borg invasion. Locutus's Cube was destroyed but he managed to escape in a Borg Sphere fleeing back in time to destroy the USS Enterprise-D shortly after its first mission to Farpoint Station. Fortunately the USS Premonition followed Locutus back and destroyed the Sphere before it could attack the Enterprise and alter history.

In 2380, Picard again heard the "voice" of the Borg and discovered the location of a nearby hive that was close to completing construction on a giant cube and resurrecting the Borg Queen by transforming a normal drone into the appropriate female form.

Defying the orders of Admiral Kathryn Janeway, Picard diverted the Enterprise from her assigned mission, and went to confront the Borg.

After losing an Away Team to the Borg, who now attacked on sight, Picard determined that the only way to get close enough to the queen to destroy her was to infiltrate himself, as Locutus.

His transformation was accomplished by Dr. Beverly Crusher, who implanted a chip in Picard's Borg cybernetics that would allow him to remain himself.

The operation didn't go as planned and Picard was captured by the Queen, who finished his transformation back into Locutus. Utilizing a Romulan cloaking device, Commander Worf brought the Enterprise within range of the cube and began a rescue operation.

The Queen was defeated by Dr. Crusher, who had developed a way to reverse the Queen's transformation and revert her to normal drone. With the Queen's defeat all of her drones, including Locutus, went into hibernation mode.

Upon returning with Locutus/Picard to the Enterprise, Dr. Crusher was able to reverse the process, and restore Picard.

At some point in the same year, Picard encountered the rogue Vulcan T'Uerell who was attempting to form a Collective of her own in order to impose her cold logic and order on the galaxy. When she encountered Picard's assembled task force of Federation, Klingon Empire and Romulan Star Empire; she referred to Picard as Locutus.

Although his existence was brief, Locutus' actions left their mark more particularly on Picard. Soon after becoming himself again, Picard returned to his family at La Barre where he came to terms with what he had been through.

In 2369, the Commander Benjamin Sisko briefly met Picard on the Deep Space Nine station and he showed him hostility due to Locutus' actions leading to his wife's death, although his resentment is misplaced as Picard was in no way responsible for the actions. acts of Locutus. Shortly after being entrusted with the station, Sisko was finally able to make peace with Picard.

Reluctantly, Picard posed as Locutus in the presence of a Borg cut from the Collective, Third of Five (Later known as Hugh), to test his newfound individuality.

In 2373, Picard was tormented by memories and nightmares of his assimilation during the second attempted invasion of the Borg on earth. Picard's traumatic experience, however, enabled him to deal severe blows to the Borg cubes thanks to Locutus' knowledge. Picard also crossed paths with the Borg Queen whom he had already met as Locutus.

In 2399, Picard meets another former Borg, Seven of Nine, who asks him if he has regained all his humanity. Picard admits he never really recovered but he and she are doing the best they can to try.

Picard later visits a former Borg cube renamed the Artefact which brings back his traumatic memories until he happily reunites with Hugh, now the executive director of the Artefact. The latter reassures Picard shortly afterwards that he is no longer Locutus. 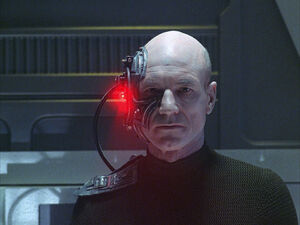 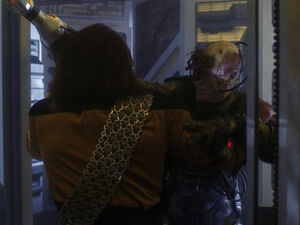 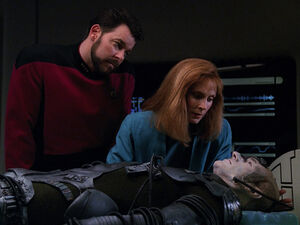 Locutus wakes up on the Enterprise. 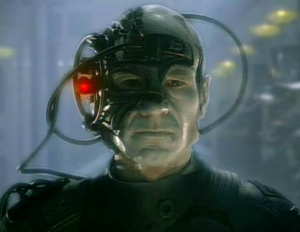 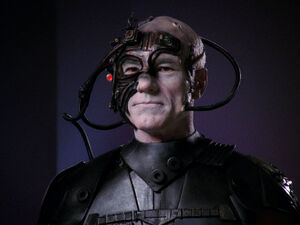 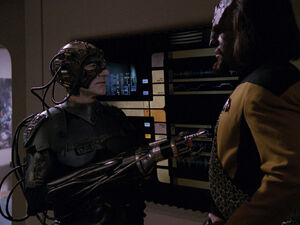 "A narrow vision. You will become one with the Borg." 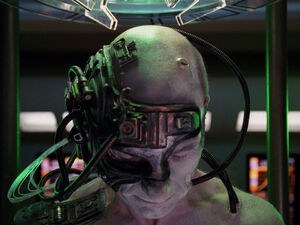 Locutus unconscious as Data connects to him. 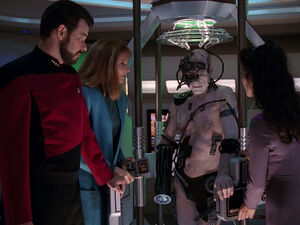 Picard's personality takes over, leading to the end of Locutus.

Locutus with the Borg Queen.