Medic and lieutenant in the U.S. Army (formerly)

Logan Nelson is a major antagonist in the Saw franchise, serving as the unseen overarching antagonist in Saw and the villain protagonist of the Jigsaw.

He is revealed to have been one of Jigsaw's victims, who was selected because he is the one who accidentally mixed up Kramer's X-rays with another patient's. However, Jigsaw changed his mind and decided that Nelson shouldn't die because of an honest mistake and rescued him seconds before he was killed by the bucket trap. Years after Kramer's death, he decides to take up the Jigsaw mantle and make it look like John Kramer is still alive.

He was portrayed by Matt Passmore.

Prior to his test, Logan served in the military as a medic and a tour in Iraq during the Iraq war, during which he was captured (but not before killing 3 rebels), brutally interrogated, and traumatized, leading to his discharge. He later returned to medical school to pursue a career as a medical examiner.

Logan was the fifth participant in the series of traps the Tuck's Pig Farm, placed there due to his negligence as a medical resident while labeling John Kramer's x-ray and delaying his diagnosis of an inoperable brain tumor. During the initial Bucket Head trap, Logan failed to wake up until the four others had freed themselves and begun to move on to the second test, not allowing him to hear Anna's realization that to be released from the headpiece they would need to cut themselves.

Before he could be pulled further into the blades, John entered the room and released Logan from the bucket headpiece, deciding that Logan should not have to die because of his own unintentional miscalculation. John proceeded to take him back to his lab and mend his wounds. Feeling gratitude towards John for sparing him, Logan began to work alongside him as his first disciple, even helping John to build the original Reverse Beartrap.

However, for reasons unknown, their partnership seems to have ended sometime before the events of the first film (as, like Lawrence Gordon, neither Mark Hoffman or Amanda Young were shown to be aware of his existence) as Logan is not known to have participated any further in the Jigsaw killings. Despite this, it appears Logan had enough respect left for his mentor as to not reveal his identity to the public.

In the time after the death of John Kramer, Logan was active on a Jigsaw fansite on the Dark Web and sold some of his and John's blueprints for torture devices, including the Cycle Trap, which was completely unknown to the public. Years later, in order to get revenge on Brad Halloran, a corrupt police detective, he built a replica of the game in which John had tried to test him 10 years earlier. Logan's goal was to kill some of the criminals Halloran had helped walk free, thus framing him for their murders. The first victim Malcolm Neale died from getting sliced up by the buzz saws and was hung above a bridge. He was visited by detectives where he and Eleanor examined the body. After being at the morgue and needing more evidence to find the criminals behind it.

Halloran became suspicious of Logan and Eleanor. In an attempt to throw him off he killed Edgar and buried him in John's coffin, continuing the ruse that John may be alive. After a second body appears, Logan decides to visit Eleanor at a bar where she takes him to her replica warehouse unaware that Keith was following them. After the police raid the factory and find the third body Keith arrests Logan where he places the blame on Halloran and is let free, after manipulating evidence. After trying to phone Eleanor he finds her next to him where she tells him that she found where the original game played. They are followed by Halloran, and while Logan appeared to be knocked unconscious, he later subdued Halloran.

Logan and Halloran wake up in a room with collars strapped to their necks. They are then told via a speaker with John Kramer's voice that they must confess why they deserve to die, or they will be killed via multiple laser cutters to the skull. Halloran signals his intention to confess first, only to press Logan's button, forcing him to speak instead. Logan confesses to mislabeling John's X-rays years ago, only to appear to be killed anyway. Halloran then confesses to being a dirty cop and letting criminals walk free, which make his lasers stop. He then notices that, unlike his own, Logan's lasers did not cause burn marks on the ceiling. He also notices that Logan's collar contained blood capsules, which had burst to make it look like Logan had been killed.

Logan, alive and unharmed, stands up. He then reveals that, ten years ago, after he was injured by the buzz saw trap, he was saved by John. Logan also talks of his suffering in the war, and how Jigsaw gave him renewed purpose, ultimately leading to him deciding to continue the legacy and became an apprentice to Jigsaw's ways. In order to confuse Halloran and everyone, Logan manipulated the game so it appeared to be run by John Kramer, manipulating video tapes with John's voice and putting John's blood in the nails of one of the victims. Logan informs Halloran that what he wanted to hear was a a confession to helping Edgar walk free for killing Logan's wife. Logan then leaves, claiming that Eleanor will be his alibi, allowing him to remain free. He then activates Halloran's lasers, gruesomely slicing his head into pieces. He seals Halloran's tomb, with the parting words "I speak for the dead". He then closes the door, sealing Halloran's body inside, and walking away, free.

Logan is fairly tall, broad-shouldered, and has dirty blond hair. He usually wears scrubs, seeing how he was a medical examiner.

Before he became John Kramer's disciple, Logan was a broken man due to his experiences in war, even having PTSD-like flashbacks or nightmares. This trauma led him to become careless with his work, shown by the fact he mislabeled John's x-ray results. It also led him to have trouble focusing, and left him without a purpose. However, he was also shown to have a strong sense of justice, as when John told him they can never come from anger or vengeance, he simply replied that there would be no justice for the victims of those that they would test. It was his work with John that allowed Logan to heal to a degree from his trauma, and to regain a purpose in life.

Logan has shown that he is quite vengeful as well, due to the fact he tested both Edgar and Halloran due to the roles they had in his wife's death, even though this goes against John's philosophy that the tests can never be personal. His sense of justice was clearly seen when he replicated John's first game, as all of his test subjects were criminals that Halloran had allowed to go free. Logan has also shown himself to be highly intelligent, able to replicate John's first game quite well, as well as maintain the ruse that John himself may be alive, as well as framing Halloran as the new Jigsaw, all the while giving himself an alibi. Logan's intelligence is also shown in his ability to create high-tech traps for his games, with the Laser Collars being the best example of this.

His military training has also given him skills with firearms and tactics, as he was able to accurately shoot Edgar with a sniper rifle in such a way that he was critically wounded but not killed, with his tactical training allowing him to quite expertly frame Halloran.

Despite this, a redeeming quality from Logan is that he has a healthy relationship with his daughter, playing catch with her and allowing her to sleep in his bed when she has a nightmare.

Nevertheless, Logan appears to be slightly hypocritical. His (presumable) reasons for wishing to succeed John are to exact vigilante and personal justice on criminals and corrupt cops, rather than to test people's will to live, which goes against everything John believed in. He is, to an extent, even willing to break the rules John set for his survival games. This is shown when Halloran reminds him that Jigsaw gave people chances to win his games, Logan cruelly tells him that he does have a choice: scream, or don't. However, Halloran did not confess to pressing Logan's button and forcing him to go first, nor did he explicitly confess to releasing Edgar Munsen after he killed Logan's wife, and the test was to confess his sins, so it is possible that Logan saw this as Halloran failing. If this is anything to go by, it's possible that Halloran would have been spared by Logan if he had confessed his action and hadn't pressed his button 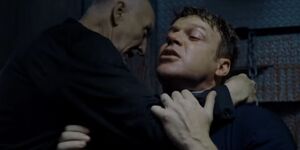 Logan being saved by John Kramer. 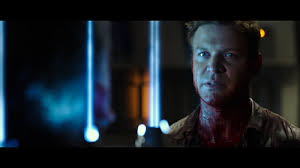 Logan revealing that he is the new Jigsaw to Brad Halloran