In one episode, he is shown to surprisingly have great aptitude with chemistry (down to spending summers with his uncle who is a chemistry professor), and he may have a crush on Zoey, as well as other girls. He always finds scheming ways to get more money, though he always gets in trouble with Dean Rivers and in some cases with his own dad. With money, he generally tends to get crazy. In one episode, he even buys a car for $350,000 which gets him in trouble. He loves telling or texting to others about others mishaps. He's something of a sexist, and often complains about the school letting girls in as it was originally boys only.

Despite this he is not truly a bad person, and although selfish and arrogant, he does care about his friends, and will come through for them when they need him to. Towards the end of the series, he renounces his womanizing ways and starts dating Quinn, although they keep it a secret from there friends till the finale for fear of how they will react. 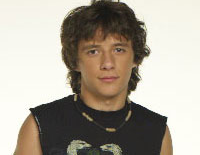