Skilled with tools and machines

The Loggers are supporting antagonists in Rio 2. They serve as Big Boss' workers/henchmen/security. The Loggers are workers who are employed by Big Boss. They help him take down the trees in the Amazon and not be found out by the authorities. They then go to the forest to plow down trees and kill the blue macaws if needs be. They are even willing to kill Tulio and Linda under orders from the Big Boss.

One of the loggers were ordered by Big Boss to stop Linda and Tulio from finding the blue macaws and the rest cutting down the trees in the Amazon rainforest.

They find Linda and Tuilo and ties them up to a tree and continues to take down the trees, they get in vehicles and start destroying more of the rainforest, Roberto gets in the way of them but Blu saves him then tells him to warn the others that the loggers are coming.

Then in the climax, the loggers try to destroy the rest of the rainforest and try killing the blu macaws, but get help from the scarlet macaws in order to save the rainforest. Their equipment is destroyed and they flee.

One of them in a crane tries to kill Edwardo who is then saved by Linda. That worker was easily defeated by the blu and scarlet macaws and the Big Boss was left to get eaten by a snake. It is possible they are either lost in the Amazon or are arrested by the police for their crimes.

"(Logging Foreman: Boss, what are you doing in the jungle)"

Loggers sees Linda and Tulio in the newspaper

The logging Foreman looks at Linda and Tulio 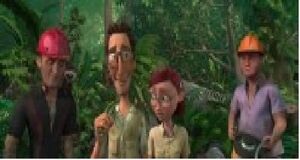 The loggers about to capture Linda and Tulio

The loggers afraid of the macaws